PASCAGOULA, Miss., Dec. 7, 2007 (PRIME NEWSWIRE) -- The Northrop Grumman-built (NYSE:NOC) Bertholf (WMSL 750), the first National Security Cutter (NSC), sailed away from the company's Pascagoula facility under its own power for the first time Tuesday morning to begin its Machinery Trials. The U.S. Coast Guard cutter is now in its third day of trials in the Gulf of Mexico; early reports on the on-going testing have been positive.

"This is a huge milestone for both the program and for the whole Coast Guard," said Capt. Patrick Stadt, prospective commanding officer of USCGC Bertholf. "This is the future of the Coast Guard and the start of the next 40 years of the surface fleet."

Bertholf is the first of eight planned ships in the new class of highly capable, technologically advanced multi-mission cutters being acquired under the U.S. Coast Guard's Deepwater Program.

This is the latest milestone for Bertholf, which started fabrication in Sept. 2004 and was christened in Nov. 2006.

"The pride that you could see on the people's faces when the tugs let us go and we went under our own power was fabulous," said Kevin Amis, Northrop Grumman NSC program manager. "The extra hard work that everyone put in for the last three weeks really paid off."

The NSC will complete three sets of trials, including Machinery Trials, which will continue into the coming weekend and Builder's Trials which are scheduled for early 2008. Bertholf is scheduled to be delivered to the Coast Guard following Acceptance Trials in spring 2008.

Bertholf is a 418 foot vessel with a 4,300 ton displacement at full load powered by a combined diesel and gas turbine power propulsion plant driving twin screws with a maximum speed of 28 knots. The cutter includes an aft launch and recovery area for two rigid hull inflatable boats, an expansive flight deck able to accommodate a range of rotary wing manned and unmanned aircraft and state-of-the-art command and control systems. In addition, the cutter features improved habitability and a sailor-centric design to facilitate optimized crewing and, enhance onboard quality of life for a mixed gender crew. 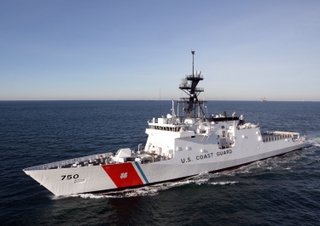