The savings realized in conducting such a trial can be applied to future upgrades and maintenance once the ship enters the fleet. The company's 23rd Aegis destroyer, built at its Pascagoula shipyard, spent three days at sea. Northrop Grumman and Navy personnel tested DDG 98's entire systems range -- from propulsion to communications to weapons -- and received high praise from Navy inspectors.

"Our test and trials team demonstrated each and every critical system on DDG 98 to our Navy customer," said Paul Robinson, Northrop Grumman vice president and general manager of surface combatants in its Ship Systems sector. "Once the testing began, the ship performed extremely well in all aspects of the super trial. The Navy-industry team collaborated to ensure the prospective commanding officer and his crew will receive the most capable DDG delivered to date."

The super-trial sequence began last summer on USS James E. Williams (DDG 95) and continued in November on USS Halsey (DDG 97). Now, with the success of a third super trial, the plan to combine the builder's and weapons' trials and the customer acceptance trial into one voyage will continue on future ships.

"Forrest Sherman marks the third successful super trial conducted here on the Gulf Coast," said Navy Capt. David Bella, supervisor of shipbuilding, conversion and repair, Gulf Coast. "Since starting the super-trial evolution, we have consistently achieved some of the highest marks on our engineering and combat-systems trial events witnessed by the Navy's Board of Inspection and Survey. Representatives from the office of the Supervisor of Shipbuilding, Gulf Coast and the Program Executive Office, Ships, are proud to have worked with the industry team of Northrop Grumman to achieve these excellent results. In early August, Forrest Sherman will be the finest destroyer delivered to the fleet."

The sea trial team composes the sequence of every single event and provides a handbook to every person on board during the trip. The team not only includes members of Northrop Grumman's test and trials group, but also other shipbuilders who volunteer as port stewards and prepare four meals a day to more than 500 sea-trial participants.

Navy Cmdr. Michael G. Van Durick, a Scranton, Pa., native and graduate of the U.S. Naval Academy, is the ship's first commanding officer and will lead a crew of 380 officers and sailors. The 509.5-foot, 9,300-ton Forrest Sherman has an overall beam of 66.5 feet and a navigational draft of 31.9 feet. Four gas-turbine propulsion plants will power the ship to speeds above 30 knots.

"The Navy, Northrop Grumman and contractor team, through hard work and close coordination, have once again produced an impressive destroyer that will carry forward the proud legacy of Forrest Sherman," said Cmdr. Van Durick. "As a happy captain speaking for my crew, we're thrilled to be partnered with the Northrop Grumman shipbuilding experts."

DDG 98 is named to honor Navy Adm. Forrest Percival Sherman (1896-1951). Sherman served as chief of Naval Operations from 1949 until his death in July 1951, and was the youngest man ever to serve in this role.

This highly capable multi-mission ship can conduct a variety of operations, from peacetime presence and crisis management to sea control and power projection, all in support of the United States' military strategy. Forrest Sherman will be capable of simultaneously fighting air, surface and subsurface battles. The ship contains myriad offensive and defensive weapons designed to support maritime defense needs well into the 21st century. 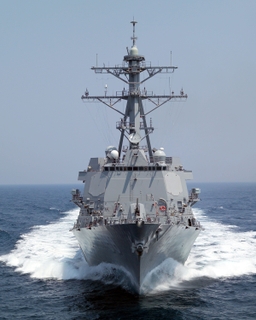