U.S. Navy Vice Adm. Phillip Balisle, commander, Naval Sea Systems Command, delivered the principal address. "Today we recognize not just our nation's newest, most capable destroyer. We also recognize a Navy family that has set the standard by which support of and contribution to our Navy and nation may be measured. I'm especially pleased and privileged to stand today in the wake of all that Kidd history, to be here as we start that wonderful tradition all over again."

"We're beginning the life of not only a new ship, but a ship that will have a spirit that is unique," Balisle continued. "A ship that will stand above its peers, not only in our Navy, but in any Navy throughout this troubled world. Kidd will operate with carrier strike groups, surface action groups, expeditionary strike groups and replenishment groups. She is a powerful, state-of-the-art warship."

Kidd was born in Cleveland, Ohio in 1884 and graduated from the U.S. Naval Academy in 1906. On Dec. 7, 1941, Kidd was commander of battleship division one and senior officer present afloat during the Japanese attack on Pearl Harbor. From the bridge of his flagship USS Arizona (BB 39), Kidd directed the counterattack against enemy aircraft until the magazine of Arizona was exploded by enemy ordnance, eventually sinking the ship, and a direct hit to the bridge took his life. Kidd was posthumously awarded the Medal of Honor for his actions on that day.

"The name Kidd is one of the most storied and honored names in the history of the modern U.S. Navy," said Allison Stiller, deputy assistant secretary of the Navy, ships. "Like the Kidd, Northrop Grumman is a family with a proud history of service to our nation. All product lines you are building are important to our nation's fight in the global war on terrorism. To the men and women of Northrop Grumman, I thank you for your dedication to producing fine warships for our future."

This highly capable multi-mission ship can conduct a variety of operations, from peacetime presence and crisis management to sea control and power projection, in support of the national military strategy. Kidd will be capable of fighting air, surface and subsurface battles simultaneously. The ship contains myriad offensive and defensive weapons designed to support maritime defense needs well into the 21st century.

"We are mindful of the fact that the fighting effectiveness of our Navy turns in large part on the quality of the warships we build here," said Philip A. Dur, president, Northrop Grumman Ship Systems. "The Aegis system is at the heart of the combat potential and fighting effectiveness of this ship and her sister ships, and is unmatched anywhere in the world. No doubt, Kidd will be predictably the best DDG built by Northrop Grumman to date."

Navy Cmdr. Richard E. Thomas of Westwood, N.J., is the ship's first commanding officer and will lead a crew of 380 officers and sailors. The 9,200-ton Kidd is the 24th Arleigh Burke-class destroyer built by Northrop Grumman Ship Systems and the 50th ship in the class. The ship has an overall length of 511 feet, a waterline beam of 59 feet and a navigational draft of 33 feet. Four gas turbine engines will power the ship to speeds in excess of 30 knots. 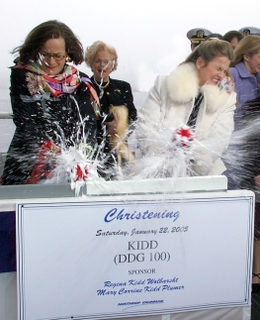