Mrs. Shelton, wife of U.S. Army Gen. Henry Hugh Shelton (Ret.), the former chairman of the Joint Chiefs of Staff, exclaimed, "bless this ship and all who sail in her," prior to her christening in the presence of approximately 1,000 guests.

Principal speaker, U.S. Navy Adm. Vern Clark, chief of Naval Operations said the ship "will be ready to take American sovereignty to the far corners of the earth, for the capability designed within this ship and for our Navy-Marine Corps team, is truly a bridge to the future."

"As we plan for the security of our nation . . .," Clark continued, "we are searching for the most advanced capabilities we can deliver to the sons and daughters of America wearing the uniforms of this nation, who are representing our nation in this global war against those using the tactics of terror. We want them to have every advantage that we can deliver to them."

The name New Orleans recognizes the largest city in Louisiana and honors one of the world's largest ports. Navy Cmdr. Brad Skillman, a native of Muncie, Ind., is New Orleans' prospective commanding officer. The ship is scheduled for commissioning in 2005 and will be homeported in San Diego.

"We are all here together sharing in a special pride," said Louisiana Gov. Kathleen Babineaux Blanco.

Blanco read a congratulatory letter from U.S. Sen. Mary Landrieu (D-La) that included the following comments: "A pride that workers from Louisiana, welders and pipefitters here in this shipyard at Avondale, together with the executives of the Navy, produced this magnificent product. As an American, I'm proud knowing this ship will soon head out to protect this nation and the freedoms that we hold so dear."

New Orleans (LPD 18) is the second ship in the San Antonio (LPD 17)-class of amphibious transport dock ships being built by Northrop Grumman for the Navy/U.S. Marine Corps team. Construction is taking place at the company's New Orleans shipyard with fabrication and additional support from three other company facilities in Pascagoula and Gulfport, Miss., and Tallulah, La.

Displacing nearly 25,000 tons, these ships will be the second-largest ships in the Navy's 21st Century Expeditionary Strike Groups. New Orleans will have a crew of 360 Sailors and 3 Marines and can carry up to 699 troops with a surge capability of up to 800.

"Like the people of New Orleans, with their diversity of culture and history, this ship represents a rich mix of systems, a tapestry of capabilities without peer," said Philip A. Dur, president, Northrop Grumman Ship Systems sector. "The San Antonio class will transform assault from the sea and bring new technologies into the fleet at a time when the fleet needs them most. This ship is built to operate and survive in hostile waters - to go into harm's way, even as she delivers lethal and precise blows in a contested littoral. New Orleans will be tough enough to meet the challenges of the next 35 years, wherever they arise."

The San Antonio-class amphibious transport dock ships are 684 feet (208.5 meters) long and 105 feet (31.9 meters) wide and will replace the functions of four classes of older amphibious ships. This new class of ship affords the Navy's Expeditionary Strike Group with the technology and flexibility to launch and recover amphibious vehicles such as the Landing Craft, Air Cushion, operate an array of rotary-wing aircraft, as well as the ability to carry and launch the Marine Corp's Expeditionary Fighting Vehicle.

Raytheon Integrated Defense Systems is the ship systems integrator for the LPD 17 ship class, with prime responsibility for the design and integration of the innovative Shipboard Wide Area Network, the backbone of the LPD capability. Raytheon draws upon its experience and proven expertise to integrate all government and contractor furnished equipment, providing exceptional capabilities to the joint expeditionary forces who will serve onboard. 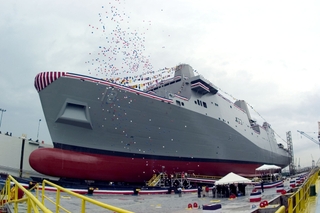