"Congratulations to Northrop Grumman, a fine company that worked so hard and devoted so many man-hours into building this modern marvel known as Mesa Verde," said Campbell, who performed principal speaking duties at the mid-morning ceremony held at the port facilities in Panama City. "Congratulations to Commander Shawn Lobree and his crew. My hopes and prayers combined with the determination and military muscle of a great nation will sail with this ship."

Mesa Verde is one of the most technologically advanced and sailor-friendly ships ever built. The ship's sponsor, Linda Campbell, wife of Senator Campbell, ordered the officers, enlisted crew and Marines to "man our ship and bring her to life" at the culmination of Saturday's ceremony.

Vice Admiral Paul Sullivan, Commander, Naval Sea Systems Command, placed the ship in commission. During his speech, Sullivan remarked, "By her very nature and design, Mesa Verde will uphold a tradition of teaming courageous sailors and Marines to maintain a forward presence from the sea. The integration of Navy and Marine Corps capabilities is essential to our remaining the world's preeminent maritime force.

"Together, the Navy and Marine Corps team assures access to the seas and demonstrates the United States' resolve to protect our national interests," Adm. Sullivan continued. "Our existence makes commerce, humanitarian assistance and safe passage possible not only for the United States, but for our allies as well."

Mesa Verde is the third Northrop Grumman-built ship in the USS San Antonio (LPD 17) class. This new class of ship affords the U.S. Navy's Expeditionary Strike Group with the technology and flexibility to launch and recover two amphibious Landing Craft; Air Cushion and operate an array of rotary-wing aircraft; as well as the ability to carry and launch 14 Marine Corps Expeditionary Fighting Vehicles.

U.S. Navy Rear Adm. Charles H. Goddard, Program Executive Officer of Ships, spoke of the Navy-Marine Corps-industry team, noting, "This team has shown us all the power that comes from collaboration, cooperation and true partnership. There is no better reflection of their resounding success than the recent Clean Sweep during Mesa Verde's sea trials. I am so proud of their collective efforts and the great gift they have given our nation."

"Today's commissioning is more than just the birth of a United States fighting ship, it is also celebration of the skill and dedication of many talented Americans," said Allison Stiller, Deputy Assistant Secretary of the Navy, Ships. "I am referring to the employees of Northrop Grumman, the Navy Program Office, and the Supervisor of Shipbuilding, Gulf Coast. This ship is a monument to your team's tremendous capabilities and you should be justifiably proud."

"The new National Maritime Strategy unveiled by the Navy, Marine Corps and Coast Guard team maintains that keeping the peace is the foundation of American and global prosperity," said Philip Teel, corporate vice president and president of Northrop Grumman's Ship Systems sector. "The ship behind me will do that. I submit to you that to keep the American economy strong and to maintain the flow of commerce to our nation, our Navy and Marine Corps team must have ships like the Mesa Verde. This ship can and will help win our nation's wars. She will be a most impressive ambassador as she proudly flies our flag."

Navy Cmdr. Shawn Lobree, of Miami, Fla., is the ship's first commanding officer and will lead a crew of 360 officers and enlisted Navy personnel.

The ship is 684 feet long and 105 feet wide and is capable of embarking a landing force of up to 800 Marines. The LPD 17 class has a navigational draft of 23 feet and displaces approximately 25,000 tons. Four turbo-charged diesels power the ship to sustained speeds of 24 knots. Mesa Verde will be homeported in Norfolk, Va.

LPD 19 is named for the Mesa Verde National park in Southwestern Colorado. Congress established Mesa Verde, meaning "green plateau," as the first cultural park in the national parks system in 1906 to preserve the notable cliff dwellings of the ancestral Pueblo culture dating back 13 centuries ago. 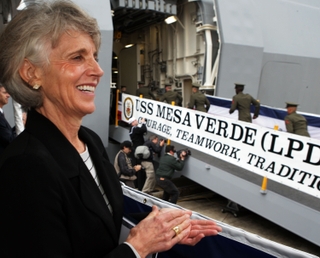