"We had a very successful trial," said Philip Teel, corporate vice president and president of Northrop Grumman Ship Systems sector. "The ship is in great shape, and this team performed incredibly well. This ship is ready to serve the Navy."

Shipbuilders worked on sea trial preparations weeks before the ship sailed the Gulf of Mexico from Aug. 13 to 16. The ship's compartments were 100 percent complete, and all systems and certifications were completed and tested 100 percent to pre-trial requirements.

Rigorous testing was performed on the ship's main propulsion, communications, steering, navigational, radar and other systems. Other exercises included anchor handling, flight operations, compartment air balancing and ballasting/de-ballasting of the well deck, where amphibious landing craft will be launched.

Navy representatives onboard during builder's trials praised the effort and teamwork displayed by Northrop Grumman shipbuilders and Navy personnel.

"Mesa Verde performed wonderfully during builder's sea trials," said U.S. Navy Cmdr. Shawn Lobree, LPD 19's prospective commanding officer. "Due to the tremendous teamwork by Northrop Grumman and the Navy, she was fully completed before going to sea, and all major testing was complete. Northrop Grumman is poised to deliver a top-rate warship to the Navy, one which shows pride in workmanship everywhere you look. Mesa Verde is a stout ship with a hearty crew. She will not disappoint!"

Capt. Beth Dexter, Supervisor of Shipbuilding, Gulf Coast, remarked, "It was an excellent trial, and I think both the Navy and Northrop Grumman teams can be very proud of LPD 19. It's a good product that we can give to the fleet."

"The Navy and Northrop Grumman team executed a tremendous ship-completion plan that led to a successful builder's trial," said Capt. Bill Galinis, U.S. Navy LPD 17 program manager. "It was an excellent sea trial. This team set the standard for how LPDs will be delivered to the Navy in the future."

Next month, the U.S. Navy's Board of Inspection and Survey team will conduct acceptance trials aboard LPD 19, which will involve more rounds of extensive testing of the ship's major systems. Mesa Verde's mission is to embark, transport and land elements of a landing force in a variety of expeditionary and special operations missions.

Mesa Verde is an LPD 17-class ship. The ship is 208.4 meters (684 feet) long, 31.9 meters (105 feet) wide, and will replace the functions of the LPD 4, LSD 36, LKA 113, and LST 1179 classes of amphibious ships. This new ship class affords the Navy's Expeditionary Strike Group with the technology and flexibility to launch and recover amphibious landing craft such as the Landing Craft Air Cushion, operate an array of rotary-wing aircraft, as well as carry and launch the U.S. Marine Corps' Expeditionary Fighting Vehicle. 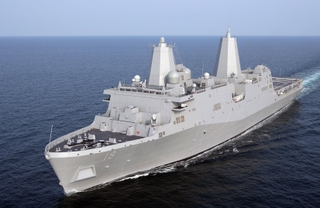