PASCAGOULA, Miss., Dec. 2, 2005 (PRIMEZONE) -- One of the most technologically-advanced and sailor-friendly U.S. Navy warships ever built will sail away from Northrop Grumman Corporation's (NYSE:NOC) shipyard on Saturday morning, Dec. 3. The amphibious transport dock ship San Antonio (LPD 17) represents the first in a class that will form a solid foundation for the Navy's new expeditionary warfare strategy.

"This ship represents the future of our U.S. Naval fighting forces," said Philip Teel, president of Northrop Grumman's Ship Systems sector. "LPD 17's multiple expeditionary functions, her improved survivability and combat readiness and the many quality-of-life upgrades result in a ship that will provide a formidable addition to the expeditionary force.

"This crew, along with our shipbuilders, rode LPD 17 through Hurricane Katrina while dockside and relied upon her capabilities during one of the worst natural disasters in our nation's memory," Teel continued. "LPD 17's departure represents a significant milestone and accomplishment in our company's road to recovery."

The LPD 17 class, 684 feet long and 105 feet wide, will replace the functions of the LPD 4, LSD 36, LKA 113 and LDT 1179 classes of amphibious ships. This new class of ship affords the Navy's Expeditionary Strike Group with the technology and flexibility to launch and recover two amphibious Landing Craft Air Cushions (LCAC), to operate an array of rotary-wing aircraft and to carry and launch 14 U.S. Marine Corps expeditionary fighting vehicles.

Technological and design advances provide benefits such as enhanced survivability, state-of-the-art command-and-control capability, modernized weapons stations and enhanced ergonomics, which greatly improves quality of life at sea for the sailors and marines. This includes "sit-up" berths that allow occupants to sleep horizontally or sit up vertically to read or write. Each berth also has 40 percent more storage space than other berths.

"Our shipbuilding team used their skills and innovative expertise to overcome many challenges in the design, development and construction of San Antonio," said Bat Robinson, sector vice president and general manager of expeditionary warfare programs for Northrop Grumman Ship Systems. "We have taken advantage and merged the versatility of our Gulf Coast facilities -- from the traditional steel fabrication and associated ship-integration craft work in New Orleans and Pascagoula to our unique composite manufacturing in Gulfport - to provide a 21st-century assembly process that will offer unprecedented life-cycle affordability and war fighting capabilities to our Navy."

Sen. Kay Bailey Hutchison (R-Texas) is the ship's sponsor and she will help "bring the ship to life" at commissioning ceremonies in Ingleside, Texas, on Jan. 14. Capt. Jonathan M. Padfield, a native of Salt Lake City, is San Antonio's commanding officer.

"I have been an amphibious sailor for the majority of my 22 years of naval service," said Capt. Padfield. "This is the ship we have been dreaming about and looking forward to for years. This ship combines an increased Marine Corps footprint and supportability function with 21st-century technology. This platform, along with her sister ships and remarkably trained sailors and marines, will win wars."

Northrop Grumman will build at least nine ships in the class and the first five are under contract. New Orleans (LPD 18), Mesa Verde (LPD 19), Green Bay (LPD 20) and New York (LPD 21) are each in various stages of construction at Northrop Grumman Ship Systems locations in New Orleans, and Pascagoula and Gulfport, Miss. 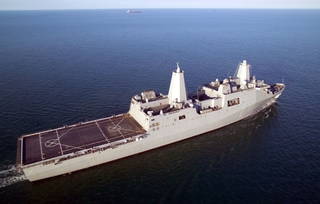