A photo accompanying this release is available at: http://media.globenewswire.com/noc/mediagallery.html?pkgid=7459

"Pressure hull complete" signifies the hull sections being joined to form a single unit. It is the last major milestone before the ship's christening and launch later this year at the company's Newport News, Va. shipyard.

"Pressure hull completion is a major milestone in the shipbuilding process; it's a significant accomplishment and a proud moment for our shipbuilders," said Becky Stewart, vice president of submarine programs for Northrop Grumman. "We're one step closer to delivering California to the Navy and making her an active part of the fleet."

California, the eighth ship of the Virginia class, is named after the "Golden State." It is being constructed at the company's Shipbuilding sector in Newport News.   The ship's keel was laid in May 2009. When delivered to the Navy in 2011, California will be the most modern and sophisticated attack submarine in the world, providing undersea supremacy well into the 21st century. Northrop Grumman Shipbuilding is teamed with General Dynamics Electric Boat to build Virginia class submarines. 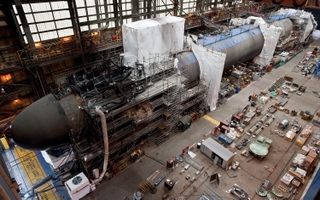