Photos accompanying this release are available at: http://media.globenewswire.com/noc/mediagallery.html?pkgid=6888

"The first sea trial is a milestone that the entire shipbuilding and Navy team has been working hard to achieve," said Becky Stewart, vice president for Northrop Grumman Shipbuilding's submarine program. "This accomplishment is a testament to the craftsmanship, dedication, persistence, and pride that our people take in the product they build -- a very complex and high quality submarine."

New Mexico is the sixth ship of the Virginia class and is in the final stages of construction and testing at the company's Newport News shipyard. Delivery to the Navy is scheduled by the end of this year. The keel for New Mexico was authenticated April 12, 2008. The ship was christened on Dec. 13, 2008.

New Mexico is named for "The Land of Enchantment." Upon delivery to the Navy this year, it will be the most modern and sophisticated attack submarine in the world, providing undersea supremacy well into the 21st century.

Northrop Grumman Newport News is teamed with General Dynamics Electric Boat to build the first 18 ships of the Virginia class. Current plans call for 30 Virginia-class submarines in the fleet. Using millions of parts from over 4,000 suppliers in 47 states and the District of Columbia, Virginia-class submarines incorporate dozens of new technologies and innovations and are the first major combatants designed with the post-Cold War security environment in mind. 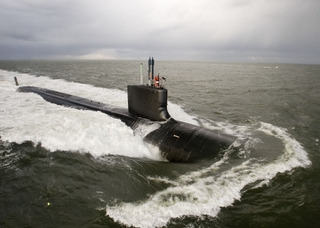