A photo accompanying this release is available at http://media.globenewswire.com/noc/mediagallery.html?pkgid=7450

"Today's commissioning completes the cycle from christening to commissioning of this highly capable ship," said Vice Admiral David Pekoske, Vice Commandant, U.S. Coast Guard. "It is through the strong partnership with industry, from concept to delivery, that you see this fine ship behind me. I thank our industrial partners, Northrop Grumman and Lockheed Martin for their industry best practices that built Waesche. Your employees who built this ship are providing a service to this nation and I thank you."

Waesche is named for Adm. Russell R. Waesche, who was the first Coast Guard commandant to achieve the rank of admiral. He led the Coast Guard from 1936 to 1946, which is the longest tenure of any USCG commandant.

Adm. Waesche's granddaughter and ship's sponsor Marilla Waesche Pivonka ordered the men and women of the Waesche crew to "man our ship and bring her to life." The crew responded with an "aye aye ma'am" and double-timed it through the spectators on Coast Guard Island in Alameda, Calif.

"This is a proud day to be a shipbuilder," said Irwin F. Edenzon, vice president and general manager of Northrop Grumman Shipbuilding-Gulf Coast. "When you see the Coast Guard bring USCGC Waesche to life, for us it represents the culmination of years of hard work by thousands of shipbuilders. I believe Admiral Waesche would understand the skills and experience required of craftsmen and women and the millions of hours of hard, yet careful, labor and striving every day to get it right and do it better."

U.S. Coast Guard Capt. Lance Bardo assumed command as commanding officer of Waesche. The ship will be homeported in Alameda.

Waesche is the second of eight planned ships in the new class of highly capable, technologically advanced multimission cutters. Northrop Grumman Shipbuilding is responsible for the construction and testing of the NSC's hull, mechanical and electrical systems, while Lockheed Martin is building and integrating the command, control, communications, computers, intelligence, surveillance and reconnaissance (C4ISR) capabilities onboard the cutters.

The NSC is a 418-foot vessel with a 4,488 ton displacement at full load and is powered by a combined diesel and gas turbine power propulsion plant driving twin screws with a maximum speed of over 28 knots. The cutter includes an aft launch and recovery area for two rigid hull inflatable boats, an expansive flight deck able to accommodate a range of rotary wing manned and unmanned aircraft and state-of-the-art command and control systems. In addition, the cutter features improved habitability, and a design to facilitate optimized crewing and enhance onboard quality of life for a mixed gender crew. 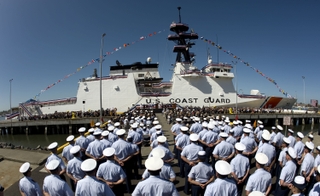