The two ships, USCGC Bertholf (WMSL 750) and USCGC Waesche (WMSL 751), are being constructed at the company's Ship Systems operation in Pascagoula.

"Lighting off the diesel engines is a critical milestone that represents thousands of hours of hard work, bringing Bertholf one step closer to self-sufficiency," said Kevin Amis, Northrop Grumman NSC program manager. "The work continued as shipbuilders accomplished the stern lift in a timely and efficient manner on Waesche. I am very proud of the men and women who make these events a success."

The next scheduled events for Waesche include the erection of the forward and aft superstructure grand blocks, followed by the upper bow unit. Only five lifts remain to complete the structure of the Waesche.

The design for the National Security Cutter has evolved since it was proposed in 2002 to meet additional, homeland security-specific requirements identified by the Coast Guard for operations in a post-9/11 operating environment. These include chemical, biological and radiological facilities, a Sensitive Compartmented Information Facility, and more robust aviation installations, among others.

Each NSC will be 418 feet long with a 4,300 ton displacement at full load, and operate at a maximum speed of 28 knots. The cutter will include an stern launch and recovery area for two rigid hull inflatable boats, an expansive flight deck able to accommodate a range of rotary wing manned and unmanned aircraft, and state-of-the-art command and control systems. In addition, the cutter features improved habitability and a sailor-centric design to facilitate optimized crewing and enhance onboard quality of life. 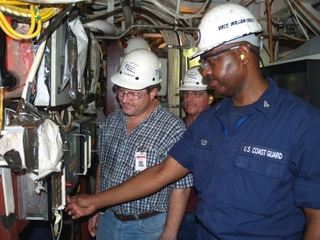