A photo accompanying this release is available at: http://media.globenewswire.com/noc/mediagallery.html?pkgid=6918

Somerset is named in honor of the passengers and crew of United Airlines Flight 93, whose courageous actions prevented terrorist hijackers from reaching their target on Sept. 11, 2001. Somerset is the county in Pennsylvania in which United Flight 93 crashed.

"This ship demonstrates the steadfast commitment of our nation to protecting our freedom, and it symbolizes the courage of those aboard Flight 93 who refused to yield to those who threatened it," said Irwin F. Edenzon, vice president and general manager, Northrop Grumman Shipbuilding - Gulf Coast. "As shipbuilders, we provide the nation's sea services with the tools of their trade. Shipbuilding is hard, complicated work. And I am proud that we do it well and strive every day to do it better."

Construction of Somerset is taking place at the Shipbuilding sector's Avondale shipyard, with fabrication support from the three other company facilities in Pascagoula and Gulfport, Miss., as well as Tallulah, La.

"The shipyard workers are building this ship for those men and women who wear our country's uniform, but there's more than one way to serve our country," said Mrs. Myers. "You are serving it by your passion and dedication in the work that you're doing and by building something that's greater than yourselves. I'm inspired by that pride and patriotism you bring to your craft."

"These men and women who have dedicated themselves to shipbuilding join our extended family to build upon a memory that we cannot afford to lose," said Gordon Felt, president, Families of Flight 93, whose brother Edward, was a passenger on the flight. "To build a naval vessel that will remind the world and motivate those who serve aboard her that what took place in Somerset County, Pennsylvania on September 11, 2001, was worthy of our honor and remembrance."

The 684-foot, 105-foot-wide LPD transport dock ships are used to transport and land U.S. Marines, their equipment and supplies by embarked air cushion or conventional landing craft and Expeditionary Fighting vehicles, amphibious assault vehicles, augmented by helicopters or vertical takeoff and landing aircraft such as the Osprey. The ships will support amphibious assault special operations, or expeditionary warfare missions throughout the first half of the 21st century.

"With dozens of ships currently under contract, I've had the opportunity to watch American shipbuilders across the country, and I can tell you there are no more dedicated, skilled or passionate crafts men and women anywhere in the world," said U.S. Navy Rear Adm. William E. Landay III, program executive officer, ships. "The United States Navy is the preeminent power in the world because of the powerful combination of the abilities of the American Sailor and Marine and the skill and passion of the American shipbuilder. I can think of no better team of patriots to entrust the care and construction of our Navy's newest amphibious assault ship."

Two other Northrop Grumman-built LPD ships are named in honor of the victims and heroes of 9/11 -- Arlington (LPD 24), currently under construction in Pascagoula, Miss., and USS New York (LPD 21), which was recently commissioned in New York City.

Somerset (LPD 25) is the fifth United States Navy ship of that name. 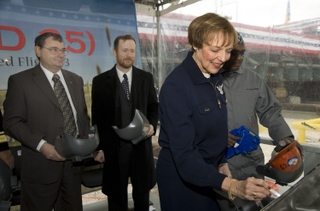