DDG 110 honors the late Vice Adm. William P. Lawrence, who spent nearly six years as a prisoner of war (POW) in North Vietnam. He later served as superintendent of the Naval Academy.

A photo accompanying this release is available at: http://media.globenewswire.com/noc/mediagallery.html?pkgid=7350

"At Northrop Grumman, we plan to build more of these warships," said Mike Petters, corporate vice president and president of Northrop Grumman Shipbuilding. "We will ensure that they are the safest, most capable and most cost-efficient ships that they can be. It's also our shipbuilding family's commitment to the Navy and to future war fighters, who will carry on the fight, valor, and honor of Admiral William P. Lawrence."

"He lived Winston Churchill's shortest speech – never give in," Perot said. "I can't think of a more appropriate motto for the USS William P. Lawrence. I know that all of you who are building this ship will continue to set the highest standards of leadership and integrity, and the crew that comes aboard will also do the same."

"Through this magnificent new warship and the name she bears, we honor the very best in human nature and the American spirit – Vice Admiral William P. Lawrence," said Rear Adm. William Landay III, Program Executive Officer, Ships. "We are moved and inspired by what he accomplished throughout his naval career, but equally by who he was – an individual of uncommon character and decency."

Adm. Landay added, "The United States Navy is the preeminent naval power in the world because of the powerful combination and remarkable abilities of the American sailor and the American shipbuilder."

"Sail with the honor of the man whose name you bear," all three sponsors said in unison.

U.S. Navy Cmdr. Tom Williams is the prospective commanding officer of the ship and will lead the crew of 276 officers and enlisted personnel. The 9,200-ton ship is 509 feet in length, has a waterline beam of 59 feet, and a navigational draft of 31 feet.  Four gas turbine engines will power the ship to speeds in excess of 30 knots.

William P. Lawrence (DDG 110) is a part of the Arleigh Burke (DDG 51)-class of guided missile destroyers. Arleigh Burke is one of the destroyer classes of the United States Navy and is built around the Aegis combat system and the SPY-1D multi-function phased array radar. The Arleigh Burke-class ships are the U.S. Navy's only active destroyers and are among the largest and most powerful destroyers ever built, both larger and more heavily armed than many previous cruisers. 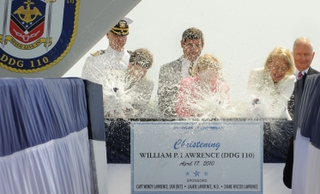