"Three years ago, at the keel laying for this ship, I said that the team of shipyard workers of Newport News and Electric Boat were the real keel and foundation," said Mrs. Bowman. "They still are, and always will be. Because of their dedication and perseverance, look at what we see today."

"USS North Carolina will be powerful, graceful and quiet. At her top speed, she will make less noise than most of our submarines do at five knots. Her firepower, stealth and agility are tailored perfectly to meet the maritime challenges of the future," said Donnelly. "She will serve the United States Navy as a powerful force for deterrence and peace around the world to ensure freedom of the seas."

On May 5, Northrop Grumman Newport News will launch North Carolina into the James River. Once in the water, tugboats will move North Carolina to the shipyard's submarine pier where final outfitting and testing will take place.

The keel for North Carolina was laid on May 22, 2004. North Carolina is slated to be delivered to the Navy this December. Northrop Grumman Newport News is teamed with General Dynamics Electric Boat to build the first 10 ships of the Virginia class. 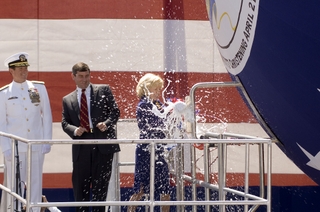