Photos accompanying this release are available at http://media.globenewswire.com/noc/mediagallery.html?pkgid=8285

Mrs. Donna Willard, the ship's sponsor, performed the traditional honor of breaking a bottle of American sparkling wine across the submarine's hull. She is the wife of Adm. Robert F. Willard, the current Commander of the U.S. Pacific Command.

Jackalyne Pfannenstiel, assistant secretary of the Navy for Energy, Installations and Environment, served as the keynote speaker.

"To the men and women of Northrop Grumman Shipbuilding, General Dynamics Electric Boat and the Navy's Virginia class program, congratulations on another world-class submarine," said Pfannenstiel. "With her nuclear power, this sub demonstrates some of our [nation's] finest technical capabilities."

"We know that the work we do is important," said Mike Petters, corporate vice president and president of Northrop Grumman Shipbuilding. "We know we are a critical part of the Navy/industry team that produces the most sophisticated and complex ships to keep our nation safe. We know we have to earn our place on that team with each and every weld with each and every pipe and with each and every test. We do this by never losing focus on what our founder, Collis P. Huntington, committed to 125 years ago, when he promised 'Always Good Ships'."

"The shipbuilding team at Newport News and Electric Boat have done a great job constructing this powerful ship," said Donald. "Thank you for what you do."

In conjunction with California's christening, Team Submarine launched an interactive learning event to promote science, technology, engineering and mathematics (STEM) at the Naval Surface Warfare Center in Corona, Calif. During the month-long event students, teachers and parents watched the christening, will learn about submarines through exhibits and participate in an interactive submarine simulation called Mission Ocean. These STEM events are being held at the Naval Surface Warfare Center in Corona today, at the Admiral Kidd Conference Center in San Diego on Nov. 15 and at the California Science Center in Los Angeles on Nov. 18.

California, the eighth ship of the Virginia class, is named after the "Golden State." The ship's motto is, "Silence is Golden." Upon delivery to the Navy in 2011, it will be the most modern and sophisticated attack submarine in the world, providing undersea supremacy well into the 21st century. Northrop Grumman Shipbuilding is teamed with General Dynamics Electric Boat to build Virginia-class submarines. 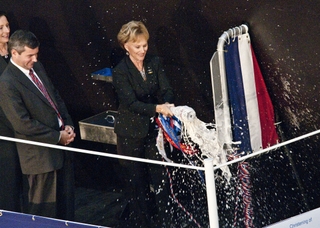