"I don't think we could have chosen a more meaningful day to hold the keel laying for a new National Security Cutter for the Coast Guard," said Northrop Grumman Ship Systems president Philip A. Teel. "Five years ago today, everything in America changed. The Coast Guard also began transforming as a result of what happened. They transformed into a multi-mission homeland security force. And we and our industry partner, Lockheed-Martin, are interested in giving the U.S. Coast Guard the means to support them in both their traditional mission and this new broad security mission. And we do understand the great sense of urgency in that support."

Northrop Grumman is currently building two of the National Security Cutters with plans to build six more. Each National Security Cutter will be 418 feet long and displace 4,300-tons fully loaded. Powered by a twin screw, combined diesel and gas turbine power propulsion plant, the NSC is designed to travel at a maximum speed of 29 knots. The cutter design includes an aft launch and recovery area for two rigid hull inflatable boats; a flight deck to accommodate a range of rotary wing manned and unmanned aircraft and state-of-the-art command and control electronics.

"As we all know, September 11 is called Patriots Day," said U.S. Coast Guard Rear Adm. Gary T. Blore, program executive officer, Integrated Deepwater System. "And we celebrate all of those who sustain America's freedom. To the men and women of this shipyard: your dedication to producing a National Security Cutter on the Coast Guard's behalf and your commitment to excellence is enough for you to be called patriots. But to have regrouped after Hurricane Katrina, to have rebuilt the shipyard, all while rebuilding your homes, is truly inspiring. On behalf of the Coast Guard, thank you for your patriotism and your dedication to this project. And thank you for helping us build the 21st Century Coast Guard."

"After Hurricane Katrina hit this yard and the Gulf Coast, our shipbuilders worked together across all of our shipyards to get us back up and running," said Teel. "And the first National Security Cutter, Bertholf, was the first ship to return to production, just 12 days after the storm."

Waesche is named in honor of U.S. Coast Guard Adm. Russell Waesche, (1886 - 1946). Waesche graduated from the Coast Guard Academy in 1906, was commissioned an ensign and then served on the Great Lakes, the Arctic, the Pacific and the Bering Sea. During Prohibition he was sent against rum-runners.

During World War II he built the Coast Guard into a force of 290 Naval ships, 255 Army vessels, 750 cutters and 3,500 various other small craft. He served three terms as Coast Guard Commandant. During the war, he led 10,000 people providing security for U.S. ports and organized the Merchant Marine Council. He was appointed by President Harry Truman in March 1946 to the "Elder Statesmen Council for National Defense." He was in 1944 elected President of the Society of American Military Engineers. He died on October 17, 1946 and was buried in Arlington National Cemetery.

Deepwater is an annually funded, multi-year recapitalization program to modernize, replace and sustain the Coast Guard's legacy vessels, aircraft and electronic systems using an integrated, whole system approach. It is the largest acquisition effort in the history of the Coast Guard. When complete, the interoperable Deepwater system will include three classes of new cutters and their associated small boats, a new and upgraded fixed-wing manned aircraft fleet, upgraded helicopters, and cutter- and land-based unmanned air vehicles. All of these highly capable assets will be linked by Command & Control, Communications, Computers, Intelligence, Surveillance and Reconnaissance systems, and supported by an efficient and progressive integrated logistics system.

Integrated Coast Guard Systems is a joint venture of Lockheed Martin (NYSE: LMT) and Northrop Grumman. ICGS was awarded the Deepwater program contract in June 2002 and has recently been extended through 2011. Headquartered in Rosslyn, Va., core leadership teams are located in Virginia, Louisiana, Mississippi, New Jersey, and Washington, D.C. 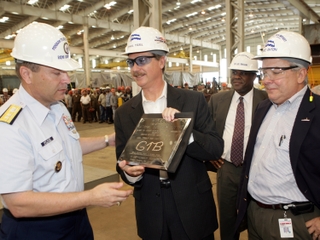