A video accompanying this release is available at http://www.sb.northropgrumman.com/media/video/assets/2009/CVN77_Media_Aerials.wmv.

Builder's sea trials provide an opportunity to test systems, components and compartments at sea for the first time. The trials also include high-speed runs and a demonstration of the carrier's other capabilities.

"The road to get CVN 77 to this point has been a long journey that started in January 2001 with the detailed design and construction contract," said Scott Stabler, Northrop Grumman Shipbuilding's vice president overseeing the project. "Since then, we've worked millions of man hours, installed more than eight and a half million feet of cable, updated more than 70 percent of the design, and brought 90,000 tons of steel to life. Seeing CVN 77 in action, doing what she was built to do, brings a great sense of pride and accomplishment. She's a credit to the shipbuilders from every part of the shipyard that made this possible."

"Builder's trials is a very exciting time for the crew of USS George H.W. Bush as it is the first time we take her to sea," said Capt. Kevin E. O'Flaherty, the aircraft carrier's commanding officer. "The success of sea trials wouldn't be possible without the hard work of the ship's crew working along side the shipbuilders to test and train on this complex and capable ship. I'm very impressed by the dedication of all."

Named after America's 41st president, USS George H. W. Bush is the 10th and final Nimitz-class aircraft carrier. Its keel was laid Sept. 6, 2003; it was christened Oct. 7, 2006 and commissioned Jan. 10, 2009. At 1,092 feet in length, USS George H. W. Bush is nearly as long as the Empire State Building is tall. Upon delivery to the Navy in the spring, it will weigh 97,000 tons and carry more than 80 combat aircraft. Its top speed will exceed 30 knots, and powered with two nuclear reactors, it will operate for more than 20 years without refueling. 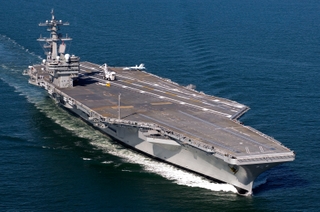