"We're investing in our future," said Bob Gunter, senior vice president of operations for Northrop Grumman's Newport News sector. "These innovative facilities will improve our capability and increase efficiency as well as improve the quality of life for our employees."

The multi-level pier is 1,040 feet long and is designed to support outfitting and testing for both aircraft carrier new construction and overhaul. Among its features are 28,000 square feet of material staging area, raised crane rails to improve material flow to the ship deck, 300 office spaces, lunch tables and passageways for personnel and vehicles. Representatives of Northrop Grumman and the U.S. Navy officially opened the pier with a ceremonial ribbon cutting on May 10, one day after the USS Carl Vinson (CVN 70) was moved there after a successful undocking. Construction on the pier began in 2003.

Representatives of Northrop Grumman and the Navy officially opened the covered module outfitting facility with a ceremonial ribbon cutting on May 30. The 1.2-acre building is located on the company's final assembly platen, adjacent to dry dock 12. It features a retractable roof that will allow ship units to be lifted out of the building and into the dry dock. A 600-ton section of CVN 78, the first ship of the Gerald R. Ford class aircraft carrier, will be the first unit under construction in the facility.

Construction of the covered module outfitting facility began in 2006. It is one of four new facilities to support Gerald R. Ford-class construction. These facilities, which will allow employees to work under cover, uninterrupted by the weather, will house additional cranes used to build pre-outfitting units to a higher degree of completion than in the past. The sector is also upgrading its 900-ton gantry crane to lift 1,050 tons, allowing for a more efficient build strategy and larger, heavier crane lifts. 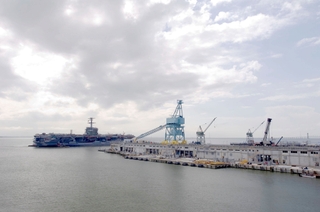 Northrop Grumman has completed work on a pier designed to support outfitting and testing for both carrier new construction and overhaul.
View | Download (308.6 kB)