A photo accompanying this release is available at http://media.globenewswire.com/noc/mediagallery.html?pkgid=8414

The carrier is undergoing a refueling and complex overhaul at the company's Shipbuilding sector in Newport News Va., the nation's sole designer, builder and refueler of nuclear-powered aircraft carriers.

"This is a significant accomplishment in a very large and complex project," said Todd West, CVN 71 program director for Northrop Grumman Shipbuilding-Newport News. "Installing the ship's propulsion shafts and propellers is a significant accomplishment performed during the docking phase of the overhaul and brings us one step closer to moving the ship out of dry dock and back into the water."

An important aspect of this availability includes removing, refurbishing and reinstalling the ship's propulsion shafts and 60,000 pound propellers. Work began shortly after the ship arrived in August 2009 and took about 15 months to complete.

"It's great to witness Team Theodore Roosevelt achieving this important milestone in returning a renewed, refueled and refurbished Theodore Roosevelt to the fleet," said the ship's executive officer, Capt. Douglas Verissimo, U.S. Navy. "Reinstalling the propellers aboard this ship is an exciting feat of engineering, teamwork and skill, and it represents a significant achievement as we work together to get the ship back in the water again where she belongs." 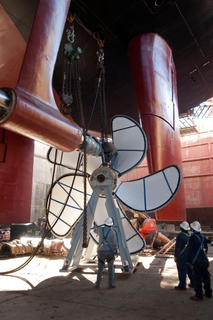