The carrier is undergoing a refueling and complex overhaul at the company's Newport News sector, the nation's sole designer, builder and refueler of nuclear-powered aircraft carriers. An important aspect of this availability includes removing, refurbishing and reinstalling the ship's two rudders.

"This is a significant accomplishment in a very large and complex project," said Ken Mahler, vice president of aircraft carrier overhauls for Northrop Grumman's Newport News sector. "The rudders are the first large structural components below the ship's waterline to be reinstalled, and a great example of the Newport News and Navy team working together to bring the Vinson back to life."

The rudders weigh approximately 50 tons each and are used to steer the ship from right to left. During refurbishment, the rudders were inspected, cleaned, painted and re-installed on the ship. Work began shortly after the ship arrived on Nov. 11, 2005 and took about 10 months to complete.

"It's great to witness Team Carl Vinson achieving this important milestone along the path of returning a renewed, refueled, and refurbished Carl Vinson to the fleet," said the ship's commanding officer, Capt. Ted Carter, USN. "Reinstalling the rudders aboard this great big ship is a thrilling step -- and it will be just one of many that all of us working on this crucially important project make towards the building of a new era in Carl Vinson's service to our nation." 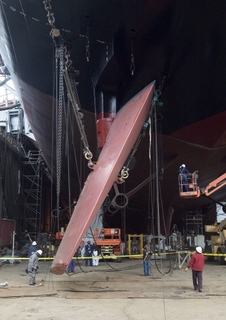