NEWPORT NEWS, Va., July 2, 2009 (GLOBE NEWSWIRE) -- Northrop Grumman Corporation (NYSE:NOC) completed initial sea trials of the nuclear-powered aircraft carrier, USS Carl Vinson (CVN 70) yesterday. The trials follow the completion of a successful three and a half-year evolution known as a refueling and complex overhaul. The project was performed by the company's Shipbuilding sector in Newport News, Va. and is projected to complete within budget. The ship is scheduled to be delivered to the U. S. Navy next week.

Photos accompanying this release are available at: http://media.globenewswire.com/noc/

The carrier, which departed on sea trials June 28, returned to Naval Station Norfolk yesterday flying a broom on its mast to signify a successful sea trial. Sea trials are conducted to test systems, components and demonstrate operations at sea. The trials also include high-speed runs and a demonstration of the carrier's other capabilities.

The refueling and complex overhaul is performed only once in a carrier's 50-year life and includes extensive modernization work to more than 2,300 compartments, hundreds of system upgrades, and over 20 million man-hours of work, to include defueling and refueling the nuclear reactors. 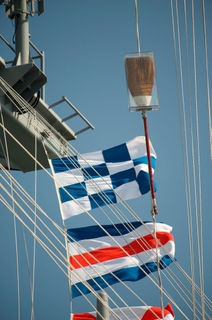