"This is a tremendous way to end 2006," said Northrop Grumman Ship Systems president Philip A. Teel. "It is a tribute to the dedication displayed by our shipbuilding team - the company's shipbuilders and the Navy. Congratulations to all who played a part in the successful delivery of these ships."

"The delivery of Kidd, which was heavily damaged during Hurricane Katrina, demonstrates the determination of the Northrop Grumman craftsmen to build a quality ship for the Navy and the nation," said U.S. Navy Capt. Beth Dexter, Supervisor of Shipbuilding, Gulf Coast. "There is still work to be done before New Orleans joins the fleet, but I am proud to accept delivery of this fine amphibious ship. Well done to the DDG 100 and LPD 18 teams, I know the sailors and Marines who sail on these ships will make you proud."

Kidd is the 24th Aegis guided missile destroyer built by Northrop Grumman, and she received hull damage during Hurricane Katrina in August 2005. With her repaired hull, DDG 100 recently completed successful combined "super" trials in the Gulf of Mexico and will be commissioned to the Navy next summer.

"The delivery of Kidd is another huge milestone in the life of this great ship," said U.S. Navy Cmdr. Richard E. Thomas, prospective commanding officer of the DDG 100. "This milestone was met in large part due to the Herculean efforts of the Northrop Grumman shipbuilders, who poured their blood and sweat into Kidd day after day. Although the hurricane dealt the ship and shipyard a huge blow last year, the shipbuilders never gave up. This has truly been a phenomenal team effort between Northrop Grumman, the Supervisor of Shipbuilding and my crew."

"This event is truly a significant victory for the all the men and women at Ship Systems who had a hand in restoring a vessel which 15 months ago had the majority of the machinery spaces submerged," said Kevin Jarvis, vice president of the DDG program for Northrop Grumman Ship Systems. "There are many folks who rose above the conditions they were dealt at the shipyard and at home to make this one of the best ships this company has delivered. A special thanks to the hundreds of men and women in operations who showed their pride as shipbuilders to make this ship 'truly new.'"

The amphibious transport dock ship New Orleans (LPD 18) is the second Northrop Grumman-built ship in the USS San Antonio (LPD 17) class. The 684-foot ship sailed down the Mississippi River past the New Orleans skyline en route to the Gulf of Mexico twice this fall for her builder's and U.S. Navy's Board of Inspection and Survey's acceptance sea trials. The ship is scheduled to be commissioned in New Orleans this March.

"Having New Orleans deliver before Christmas is the best present that my crew and I could get," said U.S. Navy Cmdr. Brad Skillman, prospective commanding officer of LPD 18. "A technological marvel, LPD 18 offers unprecedented capability from state-of-the-art computer and communications systems to superb living conditions for the crew and embarked Marines. To have New Orleans residents build the ship creates a special connection between the city and the ship. Since LPD 18 was moored in the Mississippi River during the hurricane season of 2005, she is also a Katrina survivor. I have been amazed at the pride and resiliency of the Northrop Grumman workforce, who returned from the hurricane and worked hard to get the ship to this point even though their homes may have been destroyed. This is truly the city's ship."

"There have been obvious challenges to get this ship to this milestone, but our dedicated workforce sustained their diligent momentum throughout this entire project," said Bob Merchent, vice president of the LPD program for Northrop Grumman Ship Systems. "We will continue to work together with the Navy and ship's crew to get LPD 18 ready for our fleet. I appreciate how everyone has joined together to further push Katrina behind us." 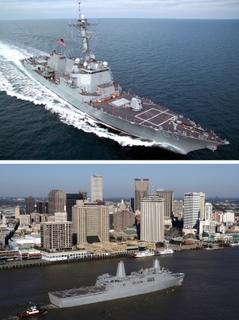