NEWPORT NEWS, Va., July 13, 2005 (PRIMEZONE) -- Northrop Grumman Corporation (NYSE:NOC) and the United Steelworkers of America (Local 8888) held a dedication ceremony on July 12 to celebrate the completion of the third house built for the Peninsula Habitat for Humanity. Volunteers from Northrop Grumman are shipbuilders from the company's Newport News shipyard.

A video accompanying this release can be found at: http://www.nn.northropgrumman.com/media/video/m051072_habitat_384k.wmv

Habitat for Humanity builds simple and affordable houses in Partnership with those in need of adequate shelter. Northrop Grumman's Newport News sector also provided financial support for this project and coordinated the resources. The house, which is being called the "Labor Management House III," is located on 6104 Grayson Avenue, in Newport News.

Representatives from Northrop Grumman Newport News, the Steelworkers Union and Habitat for Humanity participated in the ceremony. Bill Ermatinger, vice president of Human Resources and Administration for Northrop Grumman Newport News thanked the volunteers who worked on the project. "I'd like to recognize the shipbuilders turned homebuilders, many of whom are here today, who have volunteered their time to make this house a reality," said Ermatinger. He also thanked the future homeowner for her participation in the project. "We know that you will take this house and turn it into a home."

Construction on the house began last November, and more than 100 shipbuilders have participated in the project. On July 16, employees from the sector's Apprentice School football team will help move homeowner Maleka Copling into her new house. Copling attended the ceremony and expressed gratitude to the volunteers. "Thank you. Thank you all that came out and helped me experience this moment," Copling said. "I didn't think this day would ever come." 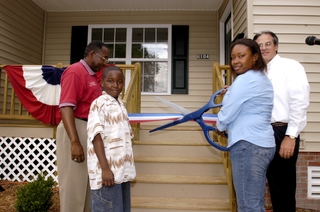