Benavidez is the final ship of seven of these LMSR (large, medium-speed, roll-on, roll-off) vessels built by Ship Systems' Avondale Operations in New Orleans, La. The ship conducted successful sea trials this summer and recorded an excellent rating by the Navy.

"I must congratulate Northrop Grumman Ship Systems, Avondale Operations on the monumental leap in quality in the construction of this ship," said Capt. John Exell, USN, supervisor of shipbuilding, conversion and repair, New Orleans, at the delivery signing ceremony aboard the vessel. "The progress on this ship is a result of the company's introduction and implementation of lean manufacturing techniques practiced by its craftspeople, team leaders, and area managers, along with my SUPSHIP staff. This ship is a fine example of delivering first-time quality. I am extremely pleased with your efforts and proud to accept this ship for the Navy and specifically the Military Sealift Command whose crews will operate it."

The 950-foot-long ships in the Bob Hope-class are among the largest in the Navy's fleet, and are designed and constructed with more than 380,000 square feet of cargo capacity on six decks. They are capable of carrying up to 1,000 military wheeled and/or tracked vehicles and other cargo.

"We are proud to have built seven great ships in the class, and are particularly pleased with the first six ships' impressive service in our nation's war on terrorism," said George Yount, vice president of operations at Avondale. "We are confident Benavidez will continue the legacy of constant support as she begins her commissioned service. Delivery of Benavidez is the culmination of years of dedicated effort by thousands of our hard-working Avondale men and women, and I congratulate all of them for a job well done."

Construction of the vessel began June 7, 1999 and its keel was laid on December 15, 1999. The ship was christened Benavidez July 21, 2001 in honor of Medal of Honor recipient Army Master Sergeant Roy P. Benavidez, of Lindenau, Texas. In 1968, Sgt. Benavidez distinguished himself in a series of daring and extremely valorous actions while serving in Vietnam as part of the First Special Forces, U. S. Army. Retired Master Sergeant Benavidez was 63 when he died Nov. 29, 1998 in San Antonio, Texas.

Northrop Grumman Ship Systems' primary operations are in New Orleans and Tallulah, La., and Pascagoula and Gulfport, Miss. The sector also has a network of fleet support offices in the U.S. and Japan. 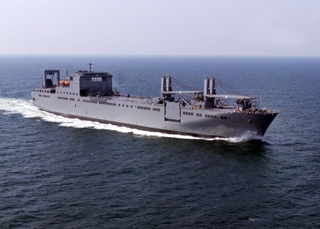