"We are proud to be part of history by delivering the final Nimitz-class carrier to the Navy today," said Ken Mahler, vice president of Navy programs at Northrop Grumman Shipbuilding in Newport News. "It represents the culmination of years of hard work, craftsmanship and dedication by thousands of shipbuilders, whose work will remain with the fleet for the next 50 years."

USS George H.W. Bush is the nation's 10th and final Nimitz-class aircraft carrier constructed by shipbuilders at Northrop Grumman Shipbuilding's shipyard in Newport News, Va. At 1,092 feet in length, USS George H. W. Bush is nearly as long as the Empire State Building is tall. It weighs 97,000 tons, can carry more than 80 combat aircraft and its top speed exceeds 30 knots. Powered with two nuclear reactors, it will operate for more than 20 years without refueling.

New design features for the USS George H. W. Bush include new propellers, a new underwater hull-coating system, an updated aviation-fuel distribution system, and modernized aircraft launch and recovery equipment. Environmental upgrades have also been designed into the ship, including a new marine sewage system. It is the second carrier to have a modernized island and a new bulbous bow design that provides more buoyancy to the forward end of the ship and improves hull efficiency. The ship's keel was laid Sept. 6, 2003, it was christened Oct. 7, 2006 and was commissioned Jan. 10, 2009. 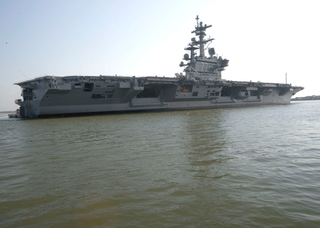