Polar Adventure, the fourth of five 125,000 DWT (deadweight-tons) ships in the Endeavour-class, spent a few weeks evading September hurricanes in the Atlantic Ocean and Gulf of Mexico before arriving in Portland, Maine, where ship-naming honors took place on Thursday, September 23.

Avondale Operations in New Orleans, with fabrication support from Ship Systems' Gulfport, Miss., facility, builds the tankers. One remains under construction with delivery expected in the last quarter of 2005.

The Endeavour-class tankers are the first crude oil carriers being built for the Alaskan trade in compliance with the federal Oil Pollution Act of 1990. They meet or exceed existing and proposed environmental regulations and set new standards for innovation, reliability, and environmental protection.

"It is my high honor to represent the fine men and women of Northrop Grumman Ship Systems who have shaped this excellent ship from raw steel to this magnificent structure," said George R. Yount, vice president, Northrop Grumman Ship Systems Avondale Operations, at the naming ceremony. "With outstanding leaders in place, the workforce expectations were raised to new levels of production execution. The impetus of this great ship has been the commitment of ConocoPhillips to transport crude oil in the safest, most technologically advanced manner and this ship allows them to perform this feat while continuing to protect the environment and provide vital energy needs to our country."

The first four Endeavour-class tankers are named in honor of the ships of legendary 18th-century explorer Captain James Cook. The first ship, Polar Endeavour, was honored as "2001 Ship of the Year" by one national maritime industry publication and named to the distinguished list of "Great Ships of 2001" by another marine magazine.

Northrop Grumman Ship Systems includes primary operations in Pascagoula and Gulfport, Miss.; and in New Orleans and Tallulah, La., as well as in a network of fleet support offices in the U.S. and Japan. Ship Systems is one of the nation's leading full-service systems companies for the design, engineering, construction and life-cycle support of major surface ships for the U.S. Navy, U.S. Coast Guard and international navies, and for commercial vessels of all types. 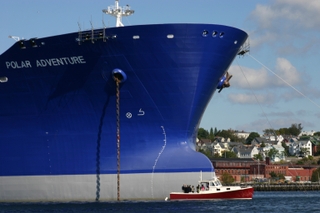 A fishing vessel is dwarfed by the giant bow of the tanker Polar Adventure
View | Download (948.7 kB)