A photo accompanying this release is available at http://media.globenewswire.com/noc/mediagallery.html?pkgid=8803

"We are here today celebrating the culmination of 175 weeks of hard work and dedication from thousands of shipbuilders, teammates and shipmates," said George Nungesser, program manager of Northrop Grumman Shipbuilding's DDG 51 program. "This ship went to sea as the most complete DDG to-date. To the officers and crew of DDG 110, the shipbuilders will always be watching you and supporting your success. We wish you fair winds and following seas."

William P. Lawrence will be commissioned later this year in Pensacola, Fla.

"This ship was the most complete going to trials and it by far performed the best during those trials," said U.S. Navy Capt. Bill Galinis, supervisor of shipbuilding, Gulf Coast. "Across the board, this ship scored 15 to 20 percent higher than any of the previous DDGs. And that speaks volumes for the work that was done by the Shipbuilding/Navy team."

U.S. Navy Cmdr. Thomas R. Williams, is the ship's first commanding officer and will lead a crew of over 300 officers and sailors. The 510-foot, 9,500-ton William P. Lawrence has an overall beam of 59 feet and a navigational draft of 31 feet. Four gas-turbine propulsion plants will power the ship to speeds above 30 knots.

"The story of Adm. Lawrence is inspiring," said Cmdr. Williams. "It inspires me and my crew to strive for greatness every day. When we leave this shipyard, we don't know what the world has out there, but I know this ship is our home. This is the Navy's best crew. And we won't let down the shipbuilders, the men and women of Northrop Grumman, and the American people when we leave the shipyard. We will never ever give in. "

DDG 110 honors the late Vice Adm. William P. Lawrence, who spent nearly six years as a prisoner of war in North Vietnam. He later served as superintendent of the U.S. Naval Academy.

This highly capable multi-mission ship can conduct a variety of operations, from peacetime presence and crisis management to sea control and power projection, all in support of the United States' military strategy. William P. Lawrence will be capable of simultaneously fighting air, surface and subsurface battles. The ship contains a myriad of offensive and defensive weapons designed to support maritime defense needs well into the 21st century. 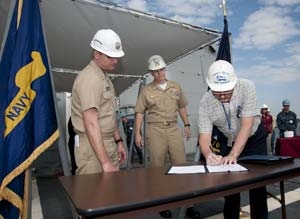