Principal speaker, U.S. Navy (ret) Adm. J. Paul Reason hailed Gravely as his mentor, saying, "Black officers like me followed his movements assiduously because he was our guide...our ready source of career advice and of inheritance."

"He excelled at the hardest jobs," Reason said. "He provided for every seagoing Naval officer a viable path to make rank. Wherever a glass ceiling was real or perceived, Sam Gravely left it shattered."

Reason said the Aegis guided missile destroyer represents the modern technology that Vice Adm. Gravely championed. "He taught two, perhaps three generations of officers and sailors to gain and maintain a warrior's advantage with new tools in a new environment. For those of you who will sail in Gravely, know that this is your legacy."

Mrs. Alma Gravely, widow of Vice Adm. Gravely, cemented an eventful day by smashing a bottle against the bow of DDG 107, officially christening the ship Gravely.

Vice Adm. Gravely (June 4, 1922 - October 22, 2004) was a pathfinder whose leadership and achievement as a decorated Naval officer and notable African-American demonstrated the value and strength of diversity in the U.S. military.

Gravely's accomplishments served as watershed milestones for individual achievement and social progress for today's Navy. He was the first African-American to be commissioned a USN Officer from the Navy Reserve Officer Training Course (ROTC); to command a warship (USS Theodore E. Chandler); and go on to command a major warship (USS Jouett); to achieve flag rank and eventually vice admiral; and to command a numbered fleet, the U.S. 3rd Fleet.

"Admiral Gravely believed that all jobs were good jobs because they provided chances to excel," said Mike Petters, corporate vice president and president of Northrop Grumman Shipbuilding. "That is our goal as shipbuilders here at Northrop Grumman. And as Gravely also professed, to be successful at anything, you must be committed enough to the cause, to focus on the ultimate goal. I can speak to the commitment of the shipbuilders at Northrop Grumman Shipbuilding -- it's outstanding -- and you can see this for yourself just by looking at the ship behind me."

Cmdr. Douglas Kunzman, the prospective commanding officer of the ship, will lead the crew of 276 officers and enlisted personnel when the ship is eventually commissioned in 2010. The 9,200-ton ship is 509 feet in length, has a waterline beam of 59 feet, and a navigational draft of 31 feet. Four gas turbine engines will power the ship to speeds in excess of 30 knots.

Gravely (DDG 107) is a part of the Arleigh Burke (DDG 51)-class of guided missile destroyers, built around the Aegis combat system and the SPY-1D multi-function phased array radar. The Arleigh Burke-class ships are the U.S. Navy's only active destroyers and are among the largest and most powerful destroyers ever built, both larger and more heavily armed than many previous cruisers.

"And when she is commissioned, the guided missile destroyer DDG 107 will be the most advanced warship ever put to sea. But this ship's biggest asset will not be her advanced weapons system, but the example she will set for us all," Rear Adm. Guillory said. "The value she will place in the contributions of every man and woman who crosses her quarterdeck and reports for duty, regardless of race, gender, color or creed." 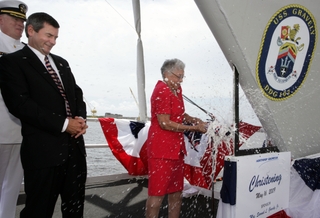