A photo accompanying this release is available at: http://media.globenewswire.com/noc/mediagallery.html?pkgid=7387

Northrop Grumman Shipbuilding's primary customer, the U.S. Navy, was represented at the ceremony by Capt. Bill Galinis, supervisor of shipbuilding, Gulf Coast, who spoke about the terror attack on the Northrop Grumman-built USS Cole (DDG 67) and how craftsmanship kept the destroyer afloat.

"You do not know the time nor the place where your work will be tested beyond measure," Capt. Galinis continued. "Our Sailors and Marines will depend on your skill, because the ships you build will deploy around the world. I ask that you become an expert in your field, become passionate about your work and always do your best. Build them to fight and to return home safely. That's what our Sailors and Marines deserve."

Speaking to the graduates, Mike Petters, corporate vice president and president of Northrop Grumman Shipbuilding, said, "In choosing to be shipbuilders and apprentice graduates, you've demonstrated a set of values associated with them. The titles of shipbuilder and apprentice graduate convey a privilege and a responsibility to continue the tradition of shipbuilding here on the Gulf Coast – a legacy that began 72 years ago at both Avondale and Pascagoula. It is a legacy of quality work, ethics and integrity – a legacy of leadership."

The Apprentice Schools at Northrop Grumman Shipbuilding-Gulf Coast provide high quality, comprehensive two-to-four-year programs for students interested in shipbuilding careers. Since 1952, the programs have produced nearly 4,000 graduates in support of the operational needs of the company. An apprenticeship is a formal training program that allows students to receive craft training and instruction, as well as classroom work, in the various aspects of a skilled trade.

"Regardless of how we came here, the opportunities happened through a vast resource of knowledge held by the journeymen and their instructors in the school," said Bill Garth, welder and Avondale's 2009 outstanding apprentice, as he addressed his fellow graduates. "After we receive preliminary basic training, we are sent to production where it becomes our responsibility to seek out an education and improve our skills. While our classroom responsibilities are over, it is now up to us to take advantage of the further opportunities provided by Northrop Grumman. They want us to succeed. They have a vested interest in each and every one of us." 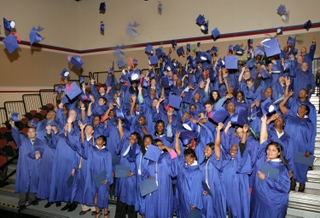