A ship launching involves a meticulous schedule of events that includes moving a ship across land via the company's rail transfer system and ends with the ship in the center of the shipyard's floating drydock. Following a complete hull survey and pre-launch inspection, water is pumped through a ballast system into the walls of the drydock to float the ship. Tug boats then move the ship to its berthing area.

"Successfully ship launchings take a huge team effort coupled with tremendous capability and engineering knowledge and our team really stepped up to complete two in one week," said George Yount, Northrop Grumman Ship Systems sector vice president of ship construction. "Sometimes shipbuilding is a little like football in that the only way you can see if you're winning or not is to check the scoreboard. Now, a year ago we got whacked pretty hard by a few hurricanes and a lot of people thought we were going down for the count. Well, as only shipyarders can do, adversity and chaos were turned into success and order."

The 844-foot, 42,800-ton Makin Island is the first of the large deck amphibious assault ship class to be built with gas turbine engines and electric drive. The ship is designed to transport and land a Marine Expeditionary Unit, a force of 1,900 Marines, ashore by helicopter, landing craft and amphibious assault vehicle.

Bertholf is a 418-foot vessel with a 4,300-ton displacement at full load. Powered by a twin screw combined diesel and gas turbine power propulsion plant, the ship is designed to travel at 29 knots maximum speed. The ship will be the largest modern vessel in the U.S. Coast Guard fleet.

"It's a magnificent ship and this is a hallmark day for the Coast Guard," said U.S. Coast Guard Capt. Patrick Stadt, prospective commanding officer of the Bertholf. "The Coast Guard's project resident management office here that works with Northrop Grumman has experienced a great relationship with the shipyard and their employees for the past several years. I've been associated with the office myself recently and have worked with ship superintendents and shipyard workers on a daily basis. These are all very fine people and good professionals and it shows in the quality of work that appeared on Bertholf today."

With the successful launch of Bertholf, Northrop Grumman employees will prepare the ship for her christening, scheduled for Nov. 11

"Since Katrina, we have delivered LPD 17, DDG 98 and a Polar tanker; christened LPD 20 and LHD 8; and now we have launched an LHD and a National Security Cutter in the same week," said Yount. "We have laid the keel for a second National Security Cutter and the next DDG, and we are simultaneously preparing three additional ships for sea trials and delivery. All-in-all we have 12 new ships in production. From where I sit that scoreboard looks pretty darn good." 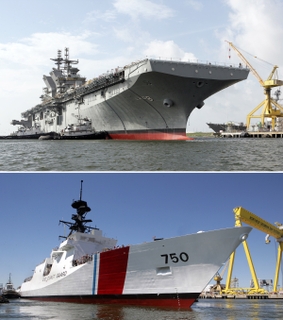