The foundry was established in 1856 and was purchased in 1902 by the Newport News shipyard. Since then, it has produced quality castings for hundreds of commercial and U.S. Navy ships and has also supported hydro-electric projects like the Hoover Dam. The foundry is capable of producing eight million pounds of castings annually, weighing from one pound to 70,000 pounds.

The Gerald R. Ford (CVN 78) class will continue the legacy of highly capable U.S. Navy aircraft carrier ship platforms. Enhancements incorporated into the design include flight deck changes, improved weapons handling systems, and a redesigned island, all resulting in increased aircraft sortie rates. It will also include new nuclear power plants; increased electrical power generation capacity; allowance for future technologies; and reduced workload for the sailors, translating to a smaller crew size and lower operating costs for the Navy. Delivery to the Navy is scheduled for 2015. 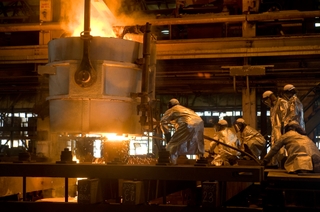