The announcement and initial melting came during a Tuesday ceremony at Amite Foundry and Machine Inc. LPD 21 is the fifth ship in the San Antonio-class of amphibious transport dock ships being built by Ship Systems.

"The spirit of the World Trade Center towers and the fierce pride we feel as Americans is being poured into a new beginning, a new life, for the USS New York," said Hansford T. Johnson, acting secretary of the Navy and principal speaker at the event. "This ship represents a new use of the steel that once stood as a mighty symbol of our nation's strength and economic vitality. The strength of those we lost and will always remember has been forged in the steel of this ship that will be carried in its bow."

Mrs. Dotty England, the ship's sponsor and wife of Gordon England, deputy secretary of the Department of Homeland Security and former secretary of the Navy, pulled a lever during the ceremony pouring the molten WTC steel into a mold to cast the bow-stem for the new ship. "For all those who will build and those who will serve aboard the USS New York and for all who suffered from the attacks of 9-11 ... let us never forget," said Mrs. England. "Never Forget" is the motto of the new ship.

A bow-stem is the foremost section of the hull on the water line that slices through the water. Last year, the people of New York provided the WTC steel for use in construction of the ship.

"Our company will treat this steel with dignity and respect," said Dr. Philip A. Dur, president, Northrop Grumman Ship Systems. "This piece of steel has been washed with the tears of Americans and hardened by millions of prayers from around the world. It is our hope that we can bring strength and victory to this steel and to the whole of LPD 21, and that the spirit of the people who represent her namesake state will fill her future crews with pride and bravery."

"On behalf of my 140 fellow employees, and the more than 2,000 citizens of Amite, I welcome you to our foundry for this solemnly patriotic celebration of the first steel pouring for USS New York," said Neil Sweet, president of Amite Foundry and Machine Inc. "All of us here in Amite are honored to play a role in the construction of a new warship named to honor the heroism of the people of New York -- City and State."

On Sept. 7, 2002, in a ceremony at the USS Intrepid Museum in New York City, then-Secretary of the Navy England announced the decision to bestow the name New York (LPD 21) on the fifth ship in the San Antonio class.

Northrop Grumman Ship Systems' primary operations are in New Orleans and Tallulah, La., and Pascagoula and Gulfport, Miss. The sector also has a network of fleet support offices in the U.S. and Japan. 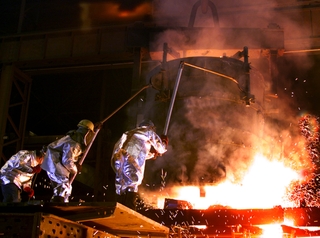