Photos accompanying this news release are available at http://media.primezone.com/noc/

More than 100 Northrop Grumman Newport News employees were involved with the design and construction of the 173-foot-long replica. Apprentices from the sector's Apprentice School built it in 22 steel sections using data provided by engineers from the CVN 21 aircraft carrier program. The Navy donated the structural material for the project.

In keeping with the time-tested shipbuilding tradition, Nancy Petters, the ship's sponsor and wife of Northrop Grumman Newport News President Mike Petters, broke a bottle of American sparkling wine across the ship's hull. She also spoke about the important lessons the ship has provided and will continue to provide.

"As an exact replica, she provided the shipyard apprentices with the perfect teaching tool," Nancy Petters said. "One where engineers learned how to calculate, designers learned how to draw, fitters learned how to piece materials together, and welders learned how to make it all permanent. And now she stands completed before us, ready to continue to reach out to generations of people to help them learn, not only about the Civil War, but also about a turning point in the history of shipbuilding itself."

"Watching the hard-working men and women of Northrop Grumman and its Apprentice School construct this full-scale replica of the USS Monitor has been nothing short of amazing," Hightower said. "The replica will provide future generations a unique experience unmatched anywhere -- a chance to imagine first-hand what standing on board one of this country's greatest warships of all time must have been like. This replica is truly an icon of the USS Monitor Center, the City of Newport News, the state and of America's history."

Since 2000, Northrop Grumman Newport News employees have volunteered their help and expertise to the USS Monitor recovery project by off-loading artifacts at shipyard piers and docks, constructing conservation tanks at the Mariners' Museum and performing topographical ultrasonic inspections and X-rays of the recovered items. Northrop Grumman Newport News has donated $1 million in financial and in-kind support to the USS Monitor Center Capital Campaign. For more information, visit www.nn.northropgrumman.com/USSMonitor.

Mike Petters spoke about the company's long history with the museum and the importance of preparing for the future by understanding the past. "We are a company dedicated to learning," he said. "And we pass this knowledge from one ship to another -- from one generation to the next. Our Apprentice School provides for that path at Newport News."

Launched on Jan. 30, 1862, the ironclad USS Monitor featured some of the latest advancements in ship propulsion, vessel construction and weaponry. The Monitor's designer, John Ericsson, produced an ingenious ship with a low freeboard and ship silhouette, primary iron ship construction, below-the-waterline operating systems, and a rotating gun turret. Though revolutionary in design, its exterior was so simplistic it was often referred to as a "cheese box on a raft." 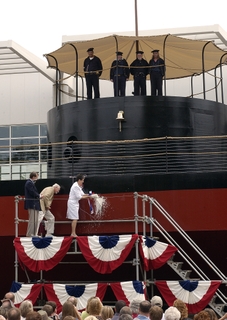