"This is a significant day for Bertholf, bringing her one step closer to self sufficiency," said Kevin Amis, National Security Cutter program manager for Northrop Grumman Ship Systems. "The success of the gas turbine engine light off is a tribute to those employees who tirelessly put in thousands of hours of hard work to make it happen."

Bertholf will be the largest multi-mission cutter in the Coast Guard fleet once it officially enters service. With an intercept speed of 28 knots, Bertholf is expected to greatly enhance the Coast Guard's responsibilities in homeland security and national defense.

"The gas turbine engine light off represents a continuation of teamwork that ensures the proper integration of equipment to support this unique propulsion system," said Lt. Cmdr. Erich Bauer, Bertholf engineering officer. "Bertholf's engineers are eagerly looking forward to witnessing first-hand the engine and control systems come to life throughout this next month as we prepare for dock and sea trials."

Work on Bertholf is progressing on schedule. As each milestone is met, personnel involved in the ship's construction meet to discuss "lessons learned." Good practices, as well as opportunities for improvement, are noted and applied to the construction process of the next ship in the series, USCGC Waesche (WMSL 751). Through lessons learned on Bertholf, work on the Waesche has improved significantly, moving thousands of hours of work from the integration area--where ship sections are joined--into the shop areas, allowing work to be accomplished earlier in the process, more efficiently and at a reduced cost to the Coast Guard.

In addition, the Bertholf is the first ship to be constructed using a new shipyard configuration in Pascagoula. The Bertholf and the Waesche are being constructed side by side, making it easy for personnel to access both ships for comparison and/or referencing activities. The new shipyard configuration also allows tests and trials to be conducted on the ships without relocating them.

Shipbuilders continue to work on the 418 foot ship in preparation for sea trials and delivery in the coming months. 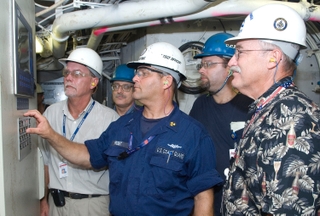