The carrier is under construction at Northrop Grumman's Newport News sector, the nation's sole designer, builder and refueler of nuclear-powered aircraft carriers. The George H. W. Bush's four propellers weigh approximately 60,000 pounds each and are a new design from previous Nimitz-class carriers. The new propellers are very similar in size, weight and material to previous ships of the class, but the blades are shaped differently to reduce wear and erosion.

"The installation of the propellers marks a major milestone in the construction of our final Nimitz-class carrier and completes the last major piece of structural work below the ship's waterline," said Kenney Overman, CVN 77 machinery installation general foreman for Northrop Grumman. "The work we've done on this ship sets the benchmark for the design and installation of these new propellers on future carriers of the fleet."

The new propellers are planned for use on the future-generation carrier class, CVN 21, and they will be installed on the USS Carl Vinson, currently in the Newport News shipyard undergoing a refueling and complex overhaul.

Other new design features for the George H. W. Bush include an updated aviation-fuel distribution system, a new marine sewage system and a new underwater hull-coating system. The George H. W. Bush is the second carrier to have a new bulbous bow design that provides more buoyancy to the forward end of the ship and improves hull efficiency. The ship's keel was laid Sept. 6, 2003. The christening will occur in October 2006 with delivery to the U.S. Navy in late 2008. 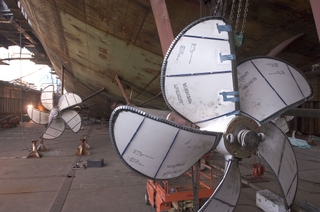