NEW ORLEANS, Nov. 21, 2005 (PRIMEZONE) -- A photo has been released today by Northrop Grumman Corporation (NYSE:NOC) and is available at http://media.primezone.com/noc/

The all-electric auxiliaries, including heating and electric water heaters, and the zonal electrical distribution system will be powered by five 2500 KW diesel generators. The electrical plant for the San Antonio LPD 17-class is a significant improvement on efficiency over previous designs and will lead to reduced maintenance requirements.

"EGLO (electric generator light-off) allows us to continue moving forward with the next stages of testing," said Phil Woods, LPD 18 ship director. "I'm very proud of the cooperation and hard work we got from everyone involved on the LPD 18 team, and we look forward to the next major milestone in the evolution of this ship." 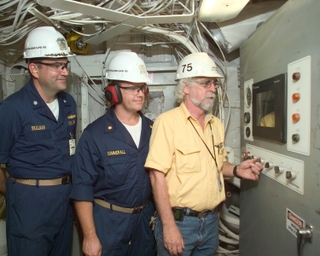