NEWPORT NEWS, Va., March 25, 2005 (PRIMEZONE) -- Northrop Grumman Corporation (NYSE:NOC) has redelivered to the Navy the nuclear-powered aircraft carrier USS Dwight D. Eisenhower (CVN 69) after completing its one and only refueling and complex overhaul in a 50-year life span.

The work was performed by the company's Newport News sector and the ship was redelivered after four days of successful sea trials, an aggressive series of operational tests to demonstrate that Eisenhower's two nuclear propulsion plants are fully mission capable.

"The effort and complexity of this job was a mammoth undertaking," said Bob Gunter, senior vice president for the aircraft carrier program at Northrop Grumman Newport News. "We've worked on every inch of this ship, installing the latest advancements in technology to make the 28-year-old `Ike' better than new."

The Eisenhower is the second ship of the Nimitz class to undergo this major life-cycle milestone. The work took more than three years to complete and included the refueling of both of the ship's reactors as well as extensive modernization work to more than 2,300 compartments, to include the ship's mess decks, medical and dental spaces, and laundry and berthing spaces. Maintenance and repair work was performed below the ship's waterline and included the application of new paint. In addition, nearly 3,000 valves were replaced and another 600 were overhauled in various ship systems.

Major upgrades were made to the flight deck, catapults, combat systems and the island house. The top two levels of the island house were removed and replaced to install a new antenna mast which provides better radar capabilities. Northrop Grumman Newport News also installed a new radar tower aboard the ship.

The Eisenhower was built by Northrop Grumman Newport News and christened on October 11, 1975 by Mrs. Mamie Doud Eisenhower, wife of the ship's namesake, President Dwight D. Eisenhower. The ship was commissioned by the U.S. Navy in 1977 and began its first deployment to the Mediterranean Sea in January 1979. After 22 years of service, the Eisenhower arrived at the Newport News shipyard in 2001 for its mid-life refueling and complex overhaul. 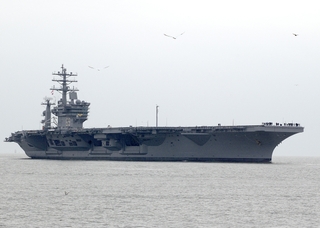