The facility began the week with positive news as Integrated Coast Guard Systems (ICGS), a joint venture between Northrop Grumman and Lockheed Martin Corporation (NYSE:LMT), successfully achieved the program design review milestone on the innovative 140-foot fast response cutter for the U.S. Coast Guard. The composite-hulled ship will be constructed at Gulfport, known for its productive and high-quality composite work, and will be the first vessel fully built and launched at the facility since 1996. Production work is expected to begin mid-next year.

Gulfport employees reported to work on Monday, ready to continue their composite work for the masts of the amphibious transport dock ships LPD 20 and LPD 21, along with the composite high-speed vessel (CHSV) test article being constructed for the Office of Naval Research. CHSV is not only important to the Office of Naval Research, but to the fast response cutter program, as it is seen as a "proof of concept" which will mitigate risks for manufacturing large composite hull forms.

"We are getting back into the business of building ships," said Phil Teel, ICGS chairman and president of Northrop Grumman's Ship Systems sector. "I am very proud of this team and the work they have accomplished to continue development of this program, in service to the U.S. Coast Guard. When we see what the Coast Guard accomplishes every day, and particularly over the past three weeks, we are passionate about pressing onward, working to build the superior capabilities of this vessel for the fleet."

This is the first major milestone in the preliminary design phase of the fast response cutter program. The purpose of the preliminary design review was to present the ship concept and to confirm the ship requirements have been sufficiently developed, including detailed reviews of the hull, mechanical and electrical design, command, control, communications and computers, intelligence, surveillance and reconnaissance (C4ISR) and logistics support. ICGS also presented information on the ship's preliminary operational plans as an asset in the Integrated Deepwater System.

The next step in the preliminary design phase will be the critical design review, on track to occur in December or January. Following this milestone, the fast response cutter could begin construction in Gulfport mid-next year. Gulfport built and delivered four Osprey (MHC 51)-class coastal mine hunters in the mid 1990s.

The fast response cutter has been advanced more than 10 years ahead of the original Deepwater program timeline and has been specifically adapted to meet post-9/11 mission requirements. The vessel will be made out of glass-reinforced plastic laminate. The fast response cutter is designed to operate at 30 knots or more, providing exceptional response and reaction capability. It will have a 40-year hull life and is being designed from the keel up to be interoperable within the Deepwater system, with command-and-control capability that matches the development of the larger National Security Cutter. The first National Security Cutter is currently under construction at the company's Pascagoula facility and the second ship will begin construction this fall.

Northrop Grumman Ship Systems includes primary operations in Pascagoula and Gulfport, Miss.; and in New Orleans and Tallulah, La., as well as in a network of fleet support offices in the U.S. and Japan. Ship Systems is one of the nation's leading full-service systems companies for the design, engineering, construction and life-cycle support of major surface ships for the U.S. Navy, Coast Guard and international navies.

IDS is a critical multi-year, multi-billion dollar program to modernize and replace the Coast Guard's aging ships and aircraft, and improve command-and-control and logistics systems. It is the largest recapitalization effort in the history of the Coast Guard. When complete, the interoperable IDS system will include three classes of new cutters and their associated small boats, a new fixed-wing manned aircraft fleet, upgraded helicopters, and both cutter-based and land-based unmanned air vehicles. All of these highly capable assets are linked by C4ISR systems, and are supported by an efficient and progressive integrated logistics system. 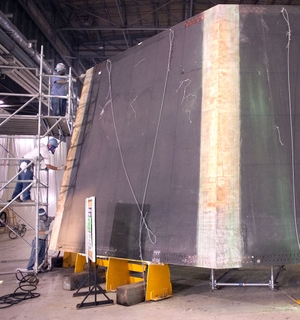