NEWPORT NEWS, Va., March 15, 2006 (PRIMEZONE) -- The nation's tenth and final Nimitz-class aircraft carrier, George H. W. Bush (CVN 77), grew by nearly 800 tons today as Northrop Grumman Corporation (NYSE:NOC) lowered the upper bow section of the ship into place. The addition of the upper bow completes the flight deck and extends the overall length of the carrier to its full size, which is as long as the Empire State Building is tall.

A video is also available at: http://www.nn.northropgrumman.com/media/video/m061018_384k.wmv

The carrier is under construction at Northrop Grumman's Newport News sector, the nation's sole designer, builder and refueler of nuclear-powered aircraft carriers. Weighing 780 tons and made up of 25 steel sections, the upper bow is one of the heaviest crane lifts in the ship's production plan. Newport News began construction on the upper bow unit last February.

"Landing the fully-outfitted upper bow on the ship is a significant milestone in the design and construction of CVN 77, and most importantly, a great team effort by our shipbuilders," said Scott Stabler, vice president for the CVN 77 program at Northrop Grumman Newport News. "We are on track for record shipboard construction progress at launch in October."

Newport News is building the George H. W. Bush using modular construction, a process where smaller sections of the ship are welded together to form units called super lifts. These super lifts are pre-outfitted and then lifted into the construction dry dock with the sector's massive 900-ton gantry crane. The upper bow unit is the 155th of 161 super lifts used to build the carrier. It joins the lower bow section which was set into place in the dry dock nearly one year ago.

The George H. W. Bush is the second carrier to have a new bulbous bow design that provides more buoyancy to the forward end of the ship and improves hull efficiency. Other new design features include an updated aviation fuel distribution system, a new marine sewage system and new propellers. The George H. W. Bush's keel was laid Sept. 6, 2003. The christening will occur in October 2006 with delivery to the U.S. Navy in late 2008. 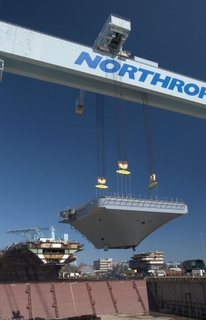