NEWPORT NEWS, Va., April 7, 2006 (PRIMEZONE) -- Northrop Grumman Corporation (NYSE:NOC) reached a milestone in the life of the newest Virginia-class submarine, Texas (SSN 775), as the crew began moving aboard and ate the first meal prepared in the ship's galley.

"The milestone of moving the crew aboard a new warship is much more than just getting the many systems and spaces built and turned over," said Capt. John Litherland, prospective commanding officer of the pre-commissioning unit Texas. "It represents the moment when the ship really begins to come to life, as the crew starts living and working aboard on a daily basis."

Texas is in the final stages of construction at the company's Newport News sector. It is the second ship of the Virginia class and will be the first submarine delivered by Newport News since 1996.

"This is the first time we've served a meal on a new submarine in a decade," said Becky Stewart, vice president for the submarine program at Northrop Grumman Newport News. "It's a very special time for the shipbuilders and the Navy crew, and this is an experience we're looking forward to repeating as we continue to build future ships of the class with our construction partner Electric Boat."

"Getting Texas to this point has required a tremendous effort by the shipbuilders of Northrop Grumman Newport News, and my crew appreciates the skill and dedication that went into producing our new 'home,'" Litherland said. "This event marks a major step toward taking Texas to sea, and my crew and I are looking forward eagerly to the upcoming crew certifications, sea trials and delivering Texas to the Navy."

The next construction milestone is sea trials, an aggressive series of operational tests to demonstrate the submarine's capabilities. Sea trials are scheduled for early May with delivery to the Navy in June.

Northrop Grumman Newport News is teamed with General Dynamics Electric Boat to build the first 10 ships of the Virginia class. Current plans call for 30 Virginia-class submarines in the fleet. The first ship of the class, USS Virginia (SSN 774), was delivered in 2004 and is the first major combatant delivered to the U.S. Navy that was designed with the post-Cold War security environment in mind. The keel for Texas was laid on July 12, 2002, the ship was christened on July 31, 2004 and launched on April 9, 2005. For more information about the Texas, please visit www.nn.northropgrumman.com/texas. 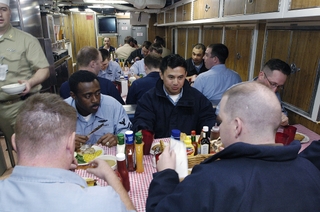