The 950-foot-long cargo ship, built at Ship Systems' Avondale Operations in New Orleans, is undergoing at-sea testing of all equipment and systems, en route to Ship Systems' Ingalls Operations in Pascagoula, Miss., for additional dockside testing. The ship is expected to return to Avondale early next week, and to be delivered to the U.S. Navy in June.

This class of Navy ships is named for the legendary entertainer Bob Hope. All seven Bob Hope-class ships were built at Avondale Operations. The previous six ships in the class all played vital roles in Operation Iraqi Freedom, when they were used extensively in getting supplies and equipment to armed forces.

Longer than three football fields, Benavidez has a beam of 105 feet and is designed with nearly 400,000 sq. ft. of cargo space. With seven cavernous decks, the ship functions as a huge floating parking garage capable of loading, transporting and off-loading any type of wheeled or tracked military vehicle. The ship can carry more than 1,000 of these military vehicles, including M1/A1 Abrams tanks, along with other types of cargo, such as containers, trailers, equipment, supplies and break-bulk cargo.

Despite a full-load displacement of 62,069 long tons, the ships' four medium-speed diesel engines can propel the ships at speeds in excess of 24 knots. The ships can accommodate 45 crew members, but can operate with a crew of only 27 people.

Northrop Grumman Ship Systems' primary operations are in New Orleans and Tallulah, Louisiana, and Pascagoula and Gulfport, Mississippi. The sector also has a network of fleet support offices in the U.S. and Japan. Ship Systems currently employs more than 18,000 shipbuilding professionals, primarily in Louisiana and Mississippi, is one of the nation's leading full service systems companies for the design, engineering, construction, and life cycle support of major surface ships for the U.S. Navy, U.S. Coast Guard and international navies, and for commercial vessels of all types. 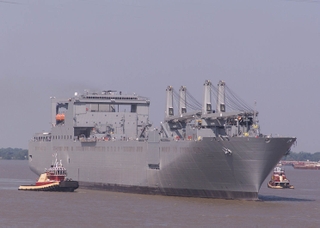