"The commitment and effort displayed by our LHD 8 team over the past several months were the reasons we were able to achieve this important milestone," said Tim Farrell, Northrop Grumman vice president and program manager for the LHD 8.

During the acceptance trial, Makin Island performed all required sea trial evolutions for the U.S. Navy's Board of Inspection and Survey (INSURV). Makin Island proved its operational success with the first gas turbine/electric-powered propulsion system ever used on large deck amphibious assault ships. The gas turbine engines and electric drive, a change from previous steam-powered ships, will provide significant life-cycle savings in manpower and maintenance costs over the previous ships.

When LHD 8 arrived back in Pascagoula, four brooms were raised symbolizing a successful sea trial.

"This ship could be categorized as a first-in-class ship because of the many design changes associated with the new propulsion system," said Irwin F. Edenzon, sector vice president and general manager of Northrop Grumman Shipbuilding-Gulf Coast. "The LHD 8 team has worked hard to overcome a number of challenges and we're looking forward to delivering a great ship next quarter."

Makin Island is scheduled for commissioning at its San Diego homeport in October 2009. 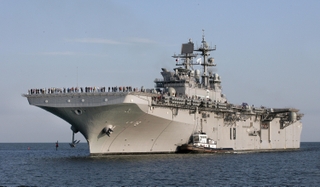