Photos accompanying this release are available at http://media.primezone.com/noc/.

"Launching a ship is always a proud moment for the shipbuilders and crew," said Becky Stewart, vice president of submarine programs for Northrop Grumman Shipbuilding-Newport News. "Our Virginia-class team has done an excellent job of achieving this milestone and furthering our efforts to deliver New Mexico eight months ahead of schedule."

On January 15, shipbuilders used a transfer car system to move the 7,800-ton New Mexico out of a construction facility to a floating dry dock. Three days later, they submerged the floating dry dock and successfully launched New Mexico into the James River. Once in the water, tugboats moved New Mexico to the shipyard's submarine pier where final outfitting and testing will take place.

Cmdr. Mark Prokopius, Prospective Commanding Officer of the Pre-Commissioning Unit New Mexico, was on board as the submarine touched water for the first time. "It's great to get our ship into the water," said Prokopius. "My crew and I are excited about achieving this significant milestone, and although we know there is a lot of work to do, launch brought with it a sense of accomplishment, a feeling of being operational and renewed energy. We look forward to working with the shipbuilders to complete construction and testing and taking her to sea later this year."

New Mexico is the sixth ship of the Virginia class. With improved stealth, sophisticated surveillance capabilities and special warfare enhancements, it will provide undersea supremacy well into the 21st century. The ship's construction began March 2004 and the ship's sponsor, Cindy Giambastiani, christened the ship during a ceremony held Dec. 13, 2008. New Mexico is scheduled for delivery in Aug. 2009. 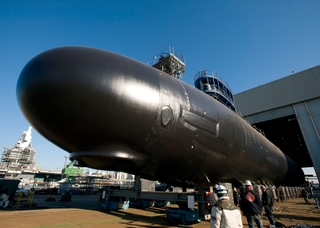 New Mexico is the sixth ship of the Virginia class.
View | Download (1.3 MB)