The work was performed by the company's Newport News sector and the ship was redelivered after two days of successful sea trials, a series of operational tests to demonstrate the carrier is fully mission capable.

"This availability has been, from the beginning, marked by open and honest communication between 'GW' and the shipyard," said Capt. Garry R. White, commanding officer of the USS George Washington (CVN 73). "This, combined with unprecedented teamwork and spirit of cooperation, has resulted in a remarkably successful maintenance period. I could not be more proud of all those involved."

"The performance of the Newport News and Navy team during this availability has been exceptional," said Ken Mahler, vice president of aircraft carrier overhauls at Northrop Grumman Newport News. "Our team goals of quality work completed safely, on or ahead of schedule and below budget, have been achieved."

The George Washington arrived at the Newport News shipyard on Jan. 28 for the availability, which included dry-docking for approximately seven months. Work included repair and refurbishment of the hull, sea chests, shafting, propellers, and rudders; blasting and coating of numerous tanks; modernization of spaces to support the F/A-18 Super Hornet aircraft equipment and weapons stowage systems; enhancements to crew living areas; scheduled maintenance on propulsion plant systems; and repair and inspections on a variety of ship systems.

Launched in 1990 and delivered to the Navy in 1992, the George Washington is the sixth nuclear-powered Nimitz-class aircraft carrier built by Northrop Grumman Newport News. At 1,092 feet, with a flight deck width of 252 feet and a displacement of 97,000 tons, the George Washington can travel in excess of 30 knots. This was the first time the ship has returned to the Newport News shipyard since it was delivered more than 12 years ago. 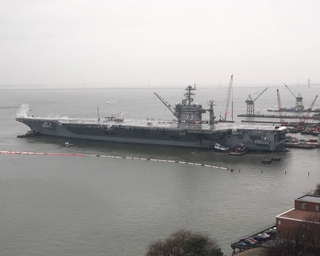