Mustin will honor the Mustin family who has a rich and honorable tradition of Naval service. The Mustin family's service lasted from 1896 to 1989 and is marked by officers who were extraordinary innovators.

Navy Capt. Henry C. Mustin (1874-1923), earned a distinguished-service commendation in the capture of Vigan, Philippines in 1899; flew the first aircraft ever catapulted from a ship; in 1914, flew the first operational missions of Naval aircraft during the Veracruz operation; and was the first commander of aircraft squadrons, battle fleet.

Henry C. Mustin's son, Navy Vice Adm. Lloyd Mustin (1911-1999), contributed to the development of the Navy's first lead-computing anti-aircraft gun sight, which proved of major importance in the air-sea actions of World War II, and served on the cruiser USS Atlanta (CL 51) during the battle of Guadalcanal. His post war service included the role of operations director, Joint Chiefs of Staff.

Henry C. Mustin, II is a decorated Vietnam veteran who was Naval inspector general, 2nd Fleet commander and deputy chief of Naval Operations for plans and policy in the 1980s.

The 509.5-foot, 9,300-ton Mustin has an overall beam of 66.5 feet and a navigational draft of 31.9 feet. Four gas turbine propulsion plants will power the ship to speeds above 31 knots. A crew of approximately 383 officers and others will operate the ship.

Mustin will be home ported in San Diego, as part of the U.S. Pacific Fleet. Ten more Aegis destroyers are under contract.

Northrop Grumman's Ship Systems sector includes primary operations in Pascagoula and Gulfport, Miss., and in New Orleans and Tallulah, La., as well as in a network of fleet support offices in the U.S. and Japan. Ship Systems, which employs more than 17,000 shipbuilding professionals, is one of the nation's leading full-service systems companies for the design, engineering, construction and life cycle support of major surface ships for the U.S. Navy, U.S. Coast Guard and international navies, and for commercial vessels of all types. 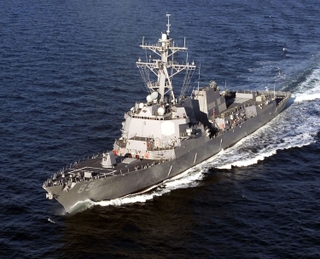