NEW ORLEANS, May 31, 2006 (PRIMEZONE) -- George R. Yount, sector vice president of ship construction for Northrop Grumman Corporation (NYSE:NOC), was honored by the U.S. Port of New Orleans Propeller Club as the 2006 Maritime Person of the Year. The award is presented annually to a person who has demonstrated outstanding leadership in furthering and promoting the maritime industry. Nominations are collected from past presidents and then a vote determines the winner.

"I'm honored to be considered part of the maritime industry, which I think has enormous value to this nation," said Yount. "We could not have evolved without the strength of the maritime industry. It's an honorable profession that we're all in and I'm proud to accept this award on behalf of the men and women working at Northrop Grumman Ship Systems."

The award was bestowed in conjunction with National Maritime Day, during a ceremony celebrating the club's 73rd anniversary. Propeller Club president Jacqueline K. Tonguis made the presentation to Yount, the 47th Maritime Person of the Year.

Yount joined Northrop Grumman's Ship Systems sector in January 2002. Prior to joining Northrop Grumman, Yount completed a 30-year career of service to the nation as a rear admiral in the U.S. Navy. He was commissioned into the Navy following graduation from the University of Wisconsin, Stout with a degree in industrial education. He later received a master's degree in mechanical engineering from the Naval Postgraduate School. He received the 1996 Distinguished Alumni award from University of Wisconsin, Stout, is a member of Sigma Xi, and a life member of the American Society of Naval Engineers. His military awards include the Navy Distinguished Service Medal, Legion of Merit with two gold stars, Meritorious Service Medal with four gold stars, Navy Commendation Medal with three gold stars, and Combat V.

His naval career included service on both surface ships and submarines with operational assignments on four ships. More than 25 years of his career was spent as a naval engineer with assignments in five different shipyards and two repair activities.

The Propeller Club is a non-profit organization whose members comprise a cross-section of the maritime industry throughout the United States and in many cities in other countries. Today, the Propeller Club is the largest "grass roots" maritime association in the United States and in the world, with the goal of educating legislatures and the public on the importance and necessity of all waterborne commerce. 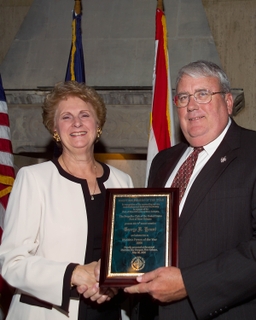