Northrop Grumman's Newport News sector is the prime contractor for the work, which is valued at approximately $12.7 million.

The project is part of a DARPA/Navy program to examine design technologies that could reduce future submarine construction costs. DARPA identified the torpedo system as one of five "Technology Barriers," or "Tango Bravo," to significantly reduce costs of future submarines. The concept is based on eliminating the submarine's torpedo room from inside the ship's pressure hull and moving the launchers outside the pressure hull. This change would eliminate complex machinery and free up valuable space inside the hull.

"We're excited to be blazing the trail on this new technology," said Becky Stewart, vice president of submarine programs at Northrop Grumman Newport News. "As we look into the future, there will be a need for innovative concepts and ideas like Tango Bravo to achieve cost reductions. This exploratory work will also help create the foundation for future submarines."

In June 2005, Northrop Grumman Newport News was awarded a $10.4 million, 18-month contract to compete in Phase I of the project. The Northrop Grumman-led team, which included Penn State Applied Research Laboratory, Special Devices, Inc., Naval Undersea Warfare Center (Newport) and BBN Technologies, designed and built a full-scale prototype of a modular launcher concept. The team successfully tested the prototype, meeting all of the program's criteria, and was selected as the winner of the Phase I competition.

Under the new contract, the Northrop Grumman-led team will spend the next 18 months working on Phase II, continuing to develop the full-scale modular launcher and performing additional full-scale testing. 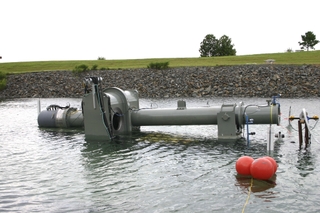