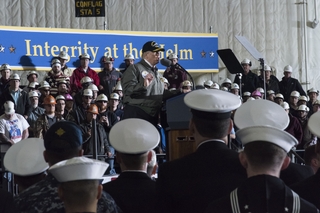 “Our carriers are the centerpiece of American military might overseas,” Trump said. “We are standing today on 4.5 acres of combat power and sovereign U.S. territory, the likes of which there is nothing to compete. There is no competition to this ship. It is a monument to American might that will provide the strength necessary to ensure peace. This ship will carry 4,500 personnel and 70 aircraft and will be a vital component of our defense. This carrier and the new ships in the Ford class will expand the ability of our nation to carry out vital missions on the oceans to project American power in distant lands.” 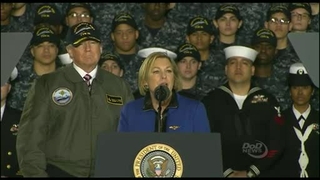