This event marks the fourth shipyard visit by the former president, who previously attended the ship's keel authentication, island landing and christening.

"I'm thrilled to be back here with you guys," Bush said. "In case you're wondering, it's still hard for me to comprehend this fantastic honor, having this ship named for me. ... One key way this ship will be no different than the one I served on in World War II is the pride and the patriotism and the commitment to duty and honor of the men and women serving aboard it. ... Heroes don't only live in the past or just in the history books. They are all around us. They're shipbuilders. They're naval personnel."

While standing on the carrier's 4.5-acre flight deck, Bush signaled for a "deadload" to be launched into the James River. Catapult testing consists of launching large containers, called deadloads, that are equal in weight to the planes that will ultimately be launched off the flight deck. Bush signed his name to the first deadload before it was launched, which also included the signatures of shipbuilders who are building the George H. W. Bush and sailors from the pre-commissioning unit who will take the carrier to sea.

Nimitz-class aircraft carriers have four steam-powered catapults that launch aircraft from the flight deck of the carrier. These catapults can propel a 48,000-pound aircraft 300 feet, from zero to 175 miles per hour in two seconds. Northrop Grumman will complete testing on all four of George H. W. Bush's catapults later this year.

Newport News President Mike Petters credited the shipbuilders for the work they are doing in constructing and testing the aircraft carrier.

"President Bush, in case you couldn't tell, we take an awful lot of pride in building this ship for you," Petters said. "These talented men and women work around the clock and in all conditions because we know that's what this ship will do for the next 50 years. I am confident that the George H.W. Bush will be the best ship in the world because it is being built by the very best shipbuilders in the world, and it will be taken to sea by the finest sailors in the world."

George H. W. Bush is the nation's tenth and final Nimitz-class aircraft carrier. Northrop Grumman Newport News has built 11 of the U.S. Navy's 12 active carriers, including all 10 ships of the Nimitz class.

At 1,092 feet in length, George H. W. Bush is nearly as long as the Empire State Building is tall. Upon delivery to the Navy in late 2008, it will weigh 97,000 tons and carry more than 80 combat aircraft. Its top speed will exceed 30 knots; and powered with two nuclear reactors, it will operate for more than 20 years without refueling. For additional information, visit www.nn.northropgrumman.com/bush. 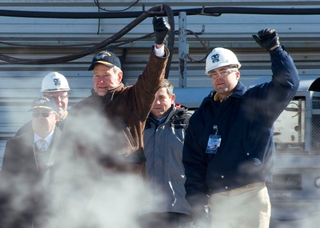