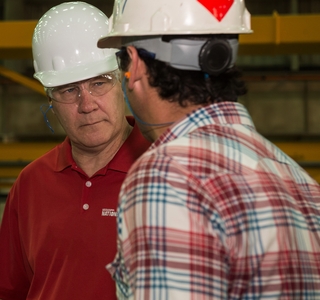 Rep. Trent Kelly, R-Miss., talks with General Superintendent Lance Carnahan during a tour of Ingalls Shipbuilding on Tuesday. Kelly met with shipbuilders on the amphibious assault ship Tripoli (LHA 7) and amphibious transport dock Portland (LPD 27) and was also reunited with Ingalls employees who were fellow veterans of the National Guard’s 890th Engineer Battalion in Gulfport. Photo by Lance Davis/HII

“As the largest employer in Mississippi, Ingalls sets the standard for the shipbuilding industry,” Kelly said after the tour. “Their commitment to the nation, building the best ships for our service members, and their talented team members are the type of dedication that makes America great.”

Kelly met with Ingalls leadership during his tour of the facility and had the chance to meet the shipbuilders on the amphibious assault ship Tripoli (LHA 7) and amphibious transport dock Portland (LPD 27). He was also reunited with Ingalls employees who were fellow veterans of the National Guard’s 890th Engineer Battalion in Gulfport.

“It is always a privilege to host one of our U.S. Congressmen so they can see the quality, pride and skills of our workforce,” said Ingalls Shipbuilding President Brian Cuccias. “Representative Kelly’s visit allowed him to understand the complexity of our facility and the processes it takes to build four classes of military ships simultaneously at an affordable price. We thank him for visiting our shipyard and supporting Mississippi’s shipbuilders.” 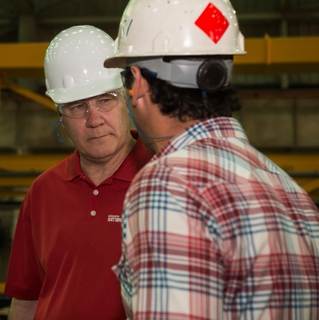